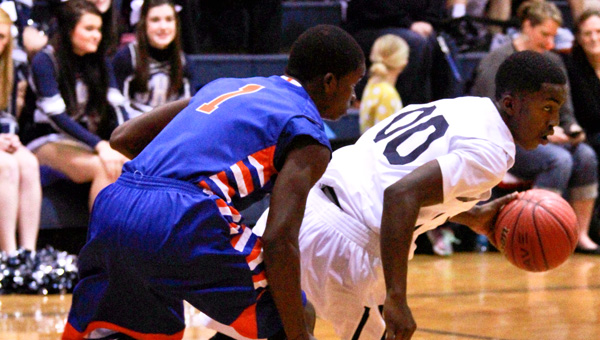 Shoulder to shoulder and several rows deep, the capacity crowd inside Jemison’s Alton Cobb Gymnasium certainly got their money’s worth for the price of admission on Friday night as the homestanding Panthers knocked off crosstown rival Chilton County in dramatic fashion, 84-80.

Behind a 50-percent shooting effort by the Panthers and 10 points on five-of-six shooting by John Underwood, the Panthers jumped out to a 17-15 first period lead in varsity boys action.

The Panthers (3-5) would lead by as many as 12 points during the second period before the Tigers went on a seven-point run in the closing minutes of the first half but still trailed 32-29 at the half.

A jumper by Jamarcus Williams gave the Tigers (5-2) their first lead of the game at the 5:50 mark of the third period.

A Cade Hatch two-pointer gave the Tigers a six-point lead late in the second quarter, but a three-point basket by Brandon Kornegay and two-pointer by Underwood set up a Keyshawn Jemison three to put the Panthers back in the lead by two with 2:18 left in the third.

The two teams battled back and forth through the closing minutes of the third period before Raquaez Cora sank a jump shot with 0:22 to play in the third to give the Tigers a six-point lead at the end of the period, 52-46.

Williams sank a two with 5:40 to play to give the Tigers a seven-point lead, but the Panthers came right back with baskets by Randy Satterfield and Underwood to make the score 58-56 late in the fourth quarter.

Satterfield would knot the game again at 60 apiece at the 4:00 mark as the two teams exchanged leads of no more than two for the next three and a half minutes.

With 0:18 to play, Jemison would converted a free throw to give the Panthers a three-point lead, but a missed attempt by the Tigers and a turnover by the Panthers gave the Tigers the ball with 0:04 to play and the ball on the Jemison side of the court.

Williams fielded the inbound for the Tigers and after racing just across half court launched a prayer that touched nothing but the bottom of the net, sending the game into overtime.

The Panthers’ free throw shooting would be the key to the overtime victory as they shot 59 percent from the charity stripe in the overtime period with Julian Jones sinking two from the line to ice the game for the Panthers with 0:04 to play.

Underwood lead the Panthers with 23 points and seven rebounds. Satterfield pitched in 20 points, 11 rebounds, two steals and a block.

With three returning starters from last year’s team, the Panthers’ varsity girls team (6-1) has an abundance of experience and talent on the court, and it showed as they picked up their sixth win of the season with a 49-30 win over CCHS.

The Tigers (1-5) had a tough time finding the basket during the first period as the Panthers built a 13-2 lead at the end of the period.

Keona Dejarnett led a Tigers push during the second, but the Panthers would maintain a 27-13 lead at halftime.

After out-scoring their visitors 13-9 in the third and 9-8 in the fourth, the Panthers cruised to the win.

Cassani Steele led the Panthers with 22 points and 23 rebounds. Gabriel Kelley and Keona DeJarnett put up nine points each for the Tigers.

Editor’s note: Below is a compilation of the statistics and achievements compiled by graduates of Chilton County area schools who... read more