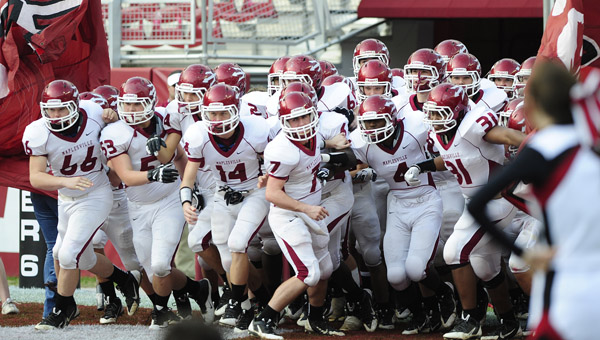 The Maplesville Red Devils run out of the tunnel at Bryant-Denny Stadium before facing Pickens County in the football Class 1A state championship Dec. 5. The Red Devils fell to the Tornadoes, 38-18.

Maplesville’s drive for its second state football championship in school history ran into a big–well, maybe fast is a better description–roadblock on Thursday.

In the Class 1A title game, Pickens County defeated Maplesville, 38-18, behind an unofficial 331 yards rushing by Jermarcus Brown. That total would set a new championship game rushing record for the Super 6 era, regardless of classification. 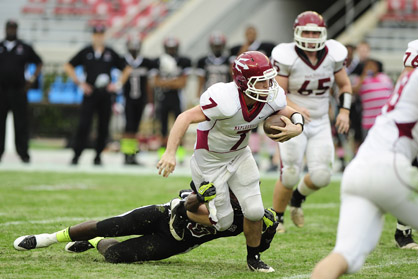 Brown ran wild in the second half and finished with a 13-yard per carry average with three touchdowns on 25 attempts.

His last score came when he lined up in punt formation (in addition to carrying the load offensively, Brown punts, kicks, returns kicks and probably drives the team bus). Instead of kicking the ball, Brown outran the Maplesville defenders to the left sideline for a 46-yard touchdown run.

Pickens County coach Patrick Plott said he wasn’t surprised by Brown’s performance at the Super 6 Championships at the University of Alabama’s Bryant-Denny Stadium in Tuscaloosa.

Brown said he and his teammates were confident they would win the championship. 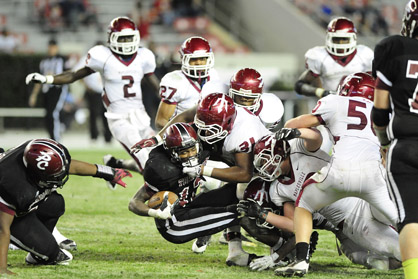 “I knew when we came out for our first practice we were going to win a state championship. We just had to be focused,” Brown said and added he didn’t realize he had turned in a record-breaking performance until asked about it after the game. “I was just trying to get a win.”

The two teams traded blows and crucial turnovers in the first half.

Maplesville quarterback Colby Chambers converted first downs on the drive with a 21-yard run and a pass to Chase Girlie. 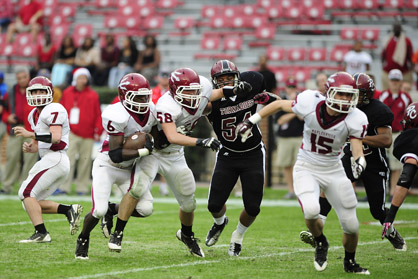 Escaping the pocket but still feeling pressure on fourth down and goal to go, Chambers heaved a desperation pass into the end zone that was intercepted and set up Pickens’ first possession–and score.

The Tornadoes churned out four first downs, including on runs by Deonte’ Simon and Jermarcus Brown, on their way to a 1-yard touchdown run by Brown.

Brown, Pickens County’s do-everything star, also added the point-after for a 7-0 lead with 3:23 remaining in the first quarter.

When Maplesville’s football team takes the field Thursday to compete for a state title, the school’s only championship team won’t... read more