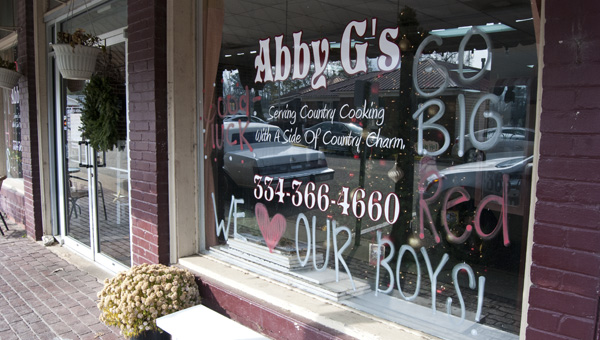 Maplesville High School cheerleaders painted the windows at Abby G’s Cafe and other businesses in Maplesville to support the varsity football team in the state championship Dec. 5.

The town of Maplesville has been a vision of red and white lately.

“The whole town from Day 1 has been so supportive,” MHS Principal Steven Hunter said Wednesday. “Not just a few people, but everyone. I’m so excited about being able to go to the Super 6 in my first year as principal here.”

The young men comprising Maplesville’s 2013 team have held true to their school’s long-standing reputation as a football powerhouse in Chilton County and Class 1A in the state.

Even so, the team’s spot in the state championship game against Pickens County on Thursday at Bryant-Denny Stadium in Tuscaloosa took hard work, and the town hasn’t taken for granted another chance to support their Red Devils in the fight for another state title.

Neal Ousley, one of the seniors on the team, turned 1 year old the day Maplesville defeated Lynn in the 1996 state championship game at Legion Field in Birmingham.

Ousley and his parents were at the game.

“Here we are 17 years later, and it’s déjà vu,” said Pam Ousley, Neal’s mother. “It’s been really, really cool for our family. This is for everybody since ’96.”

Forrest Stewart, another senior on the team, has played with Neal Ousley and several more seniors at MHS since youth league.

Teresa Stewart, Forrest’s mother, said the teams the boys have played for since seventh grade have only lost a combined five games.

“They know how each other will react,” Teresa Stewart said. “They play off each other. They’re extremely well-rounded.”

George Walker was principal at MHS when the Red Devils won the state championship in ’96.

“We had worked hard,” Walker said. “We had a good team. I think this team we have now … they’re overachievers. They’re so sharp.

As Walker ate lunch at Abby G’s Café in downtown Maplesville on Wednesday, owner Brenda Stokes asked him if he was planning to attend the Red Devils’ game against Pickens County on Thursday.

“Of course,” Walker said, chuckling. “Do you think I’d miss it?”

Bearden remembers the ’96 victory, as well as the years before and after that signified a dry spell for Maplesville in terms of state championships in football.

“All these kids, they’ve played together since young ages,” Bearden said. “You can tell they play so well as a team. That’s the way the ’96 team was.”

A Maplesville resident for 53 years, Bearden played football at MHS from 1975–1978, when a 13-man roster was the norm for his school, and the team never made the playoffs.

“We’d be playing ourselves into shape mid-season,” Bearden recalled. “We had some decent teams, but there was always somebody better.”

Others in the town, including Police Chief Todd Ingram and Town Clerk Sheila Haigler, expressed their support for the team.

“I hope they do very well,” Haigler said. “The team will get to be a part in our Christmas Parade, whether they’re champions or not. They’re still champions in the town’s book.”