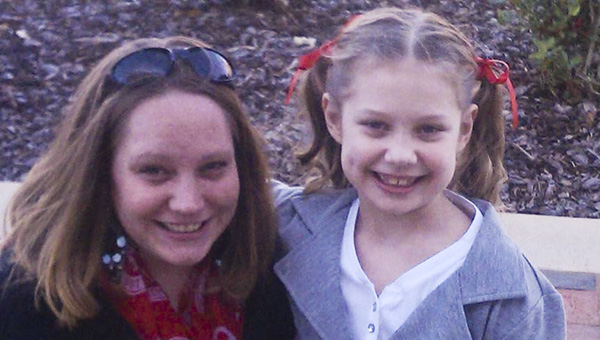 Sarah and Kelsey Eloff get ready to go to Jordan-Hare Stadium for the 2013 Iron Bowl on Saturday, Nov. 30 in Auburn.

Jemison Elementary School second grader Kelsey Eloff can say she was among thousands of people who experienced the 2013 Iron Bowl live in Jordan-Hare Stadium on Auburn University’s campus Nov. 30.

Eloff won three tickets to the game after reading six books for a statewide reading contest called “Be a Champion and Read,” sponsored by Alabama Education Association.

Eloff’s parents, Sarah and Charley, went with her to cheer on the Alabama Crimson Tide against the Auburn Tigers in one of the most memorable Iron Bowls in the history of the longtime rivalry.

“She made so many memories that are going to last her forever,” Sarah Eloff said. “It was just an awesome experience.” 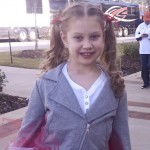 Kelsey Eloff toured the Auburn University campus before attending this year’s Iron Bowl game in Jordan-Hare Stadium which is visible behind Eloff.

Kelsey was one of three winners in the state.

More than 728 schools in Alabama participated in the contest, which challenged students to read six reading-level appropriate books to qualify for the prize – three game tickets and a visit to the football field before the game.

Along with the tickets to the game, Kelsey’s prize package included free on-campus parking passes, access to a VIP hospitality room in the Auburn Arena, sideline passes before the game and a meet-and-greet with both schools’ mascots, Big Al and Aubie.

Although they were not allowed to talk to any players, Kelsey and her parents watched from the sidelines as they stretched and threw the football during warm-up drills.

“She got to meet the Alabama cheerleaders,” Sarah said. “She got some pictures with them. Then, they put her on the 35-yard line and she got to see the eagle released out of the gate and land in the middle of the field.”

Prior to kickoff, the Eloffs also attended Tiger Walk, toured Auburn’s campus and met with Ashley McClain of AEA.

The Eloffs watched the game from seats in Section 37, Row 41.

“She really enjoyed halftime, watching the Million Dollar Band and the majorettes,” Sarah said. “She thought that was the coolest thing.”

Sarah said Kelsey’s favorite thing about her Iron Bowl experience was receiving her own Alabama jersey with a “4” on it.

“They gave each child a jersey, so she got the Alabama jersey,” Sarah said. “She said, ‘I got T.J. Yeldon!’”

Despite Auburn scoring a touchdown on the last play in regulation to win 34–28, the Eloffs enjoyed spending a day’s worth of uninterrupted quality time together.

“She (Kelsey) was sad Alabama lost, but we will still chant ‘Roll Tide Roll’ any day,” Sarah said. “After the game, we took her out to supper at Ruby Tuesday in Auburn. She got to enjoy that one-on-one time with Mom and Dad because she’s the oldest of four … to talk about her experience and the time she had.”