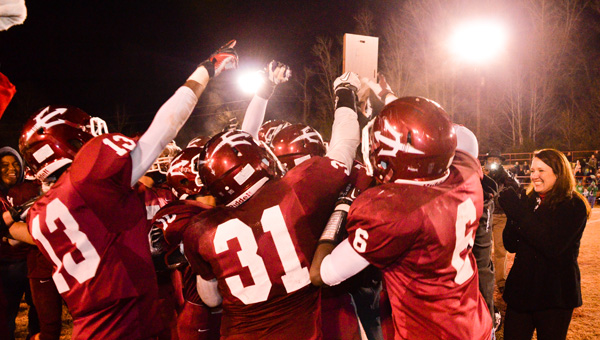 Maplesville players celebrate after defeating Brantley on Friday to secure a berth in the Class 1A state championship game.

The Maplesville Red Devils are headed back to the state championship game.

The last time the Devils played for a state title, in 1996, they defeated Lynn at Legion Field in Birmingham.

This time, after Friday’s 31-8 win over defending champ Brantley, MHS will face Pickens County at 3 p.m. on Thursday, Dec. 5.

At George Walker Jr. Stadium, Maplesville’s 14th win of the season looked much like the other 13–dominated by the Devils. 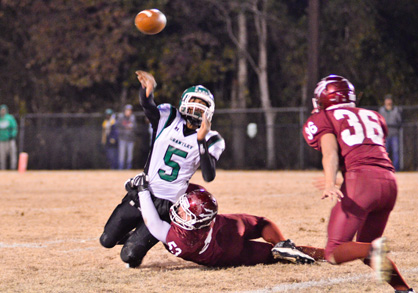 Maplesville defender William Harrison pulls down Brantley quarterback Wesley Person as he tries to get off a pass.

Maplesville found ways to move the ball early against a stingy Brantley defense, but an interception by Ken’yada Teague and three lost fumbles left the game scoreless until late in the first half.

The Devils took possession at their own 47-yard line with 2:25 remaining in the half.

Senior Devonte Morrow, usually a linebacker for MHS, lined up in the offensive backfield and took a handoff to convert a fourth down play. Then, a late hit out of bounds on Maplesville quarterback Colby Chambers set the Devils up for a 20-yard touchdown run by Damian Mitchell.

Chambers added the point-after to give the hosts a 7-0 halftime lead.

Mitchell was again a workhorse for the Maplesville offense, carrying the ball 20 times for 157 yards in the game. 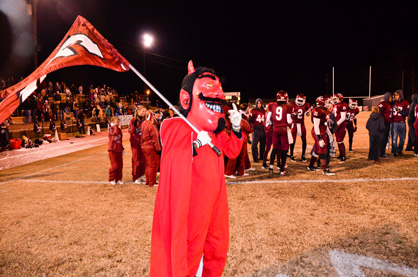 Maplesville’s Red Devil mascot celebrates with players and fans after the game.

On its first possession of the second half, the Devils drove 77 yards and the drive was capped by a 1-yard scoring run by Chambers, who set up the score with a long pass to Kendarius Bradley.

The snap for the point-afer try was mishandled, but MHS still held a 13-0 lead.

Chambers rushed 16 times for 74 yards in the game; the senior also completed nine-of-15 passes for 209 yards.

Bradley caught two passes for 83 yards in the game, and Stevonta Bradley had two receptions for 70 yards.

After an interception by Mitchell, Chambers found Anthony Moore for a touchdown pass on third-and-long with 9:47 remaining in the fourth quarter.

A two-point conversion try was unsuccessful.

Brantley (11-3) got on the scoreboard with a 35-yard pass from Wesley Person to Kaisaun Nichols, but Brett Walker recovered the ensuring onside kick and, on the next play, Mitchell raced 52 yards for a 25-8 Maplesville lead.

Maplesville tallied 22 first downs to Brantley’s 11 and outgained the Bulldogs 512-190.

Morrow’s 10 tackles paced a Maplesville defense that has allowed an opponent to reach double digits in scoring just three times all season.

As the Maplesville football team continues its climb up the mountain to a state championship, the stakes also become higher.... read more