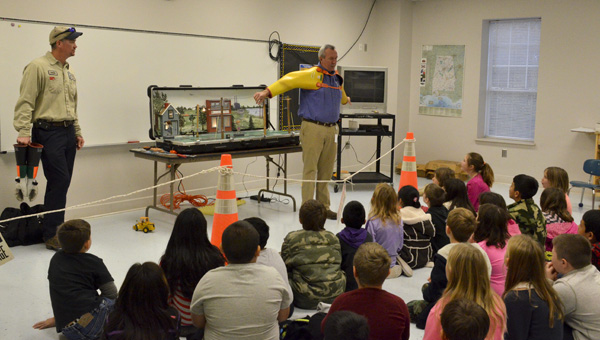 Students at Jemison Elementary School explored different careers Monday and Tuesday during career days. Darren Maddox and Heath Smith with Central Alabama Electric Cooperative led a demonstration for students on Tuesday focusing on staying safe around electricity. Maddox showed students a piece of equipment he wears, made out of rubber, to protect him when working near electricity.

Students at Jemison Elementary School had the opportunity to explore and learn about different careers during career days on Monday and Tuesday.

Representatives from different businesses both local and statewide shared with students different aspects of their jobs.

“We normally have our career fair in the spring,” JES counselor Teresa Knott said. “This year, we decided to have it in the fall and everyone had a great time. The students really enjoyed seeing all of the different things everyone brought to share.”

“The police are here to protect,” McMinn said. “We protect you from the bad guys. You shouldn’t be scared of the police.”

McMinn brought a “special” set of goggles designed to show the dangers of drinking and driving.

After asking for volunteers, McMinn and other officers let the children try on the goggles and asked them to walk a straight line. 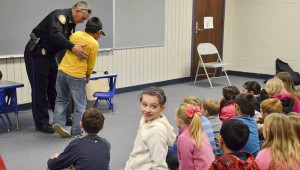 Jemison Police Department Deputy Chief Marc McMinn spoke to a group of students Tuesday morning about the police department. McMinn brought a “special” set of goggles designed to show the dangers of drinking and driving.

“Can you smell, hear or taste electricity?” Maddox asked the students. “Electricity is oftentimes a dangerous thing to the public which is why you have trained individuals who can work on it for you.”

Maddox and Smith had a demonstration table with two doll-like characters named “Neon Leon” and “Lightning Liz” to display the harmful affects of playing near electricity.

“If you see a power line that is down after a storm then you need to stay away from that,” Maddox said. “Don’t play with it because it is very dangerous.”

Knott said JES has held the career fair for more than four years, and each year different representatives come and share with the children about various occupations.

More than 16 members of the student council volunteered to serve the traditional Thanksgiving lunch on Nov. 22. When students... read more