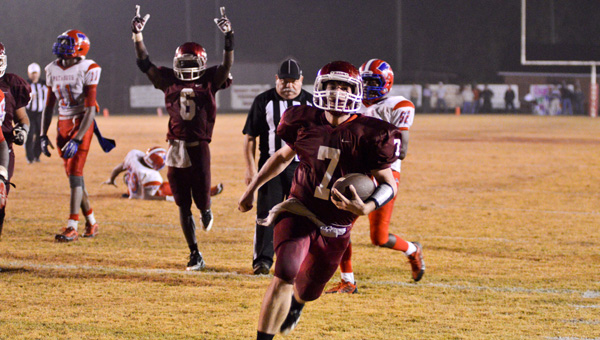 Maplesville’s 41-0 win over Linden on Friday was not the state championship game.

The Red Devils (13-0) still have to play Brantley next week, and only after a win in that game could they begin preparing for the Class 1A state finals to be held at the University of Alabama’s Bryant-Denny Stadium.

But Maplesville players, coaches and fans weren’t in the mood after Friday’s game to think about what is yet to come. They were too busy enjoying the feeling of finally toppling an old foe. 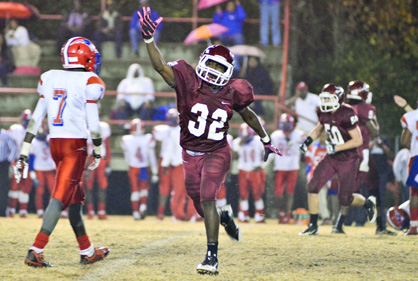 Going their way: Maplesville’s Corey Hall (above) signals first down as the Red Devils recovered a Linden fumble during Friday’s game.

Linden had beaten the Devils four consecutive times, with two of those meetings coming in the third round of the state playoffs. Maplesville ended the losing streak in dominating fashion.

After a punt on its first possession and turnover on downs on its second possession, Maplesville’s offense produced three consecutive touchdowns.

First, senior quarterback Colby Chambers snuck the ball up the middle for a 2-yard touchdown on fourth down and goal to go with 11:02 remaining in the second quarter.

The point-after try was no good, but the score seemed to open a floodgate. 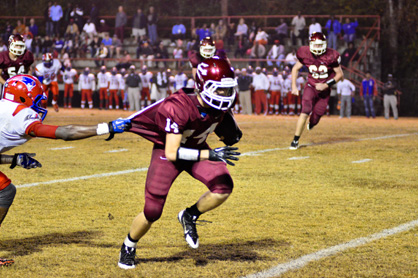 Chase Girlie (14) tries to pull away from a Linden defender.

After the third straight stop by the Maplesville defense, the Devils drove again, thanks in part to a 50-yard pass from Chambers to Stevonta Bradley, and this time scored on a five-yard Damian Mitchell run midway through the second quarter.

Maplesville to face Linden in Round 3

They knew it was coming. If the Maplesville Red Devils are to advance past the third round of the Class... read more