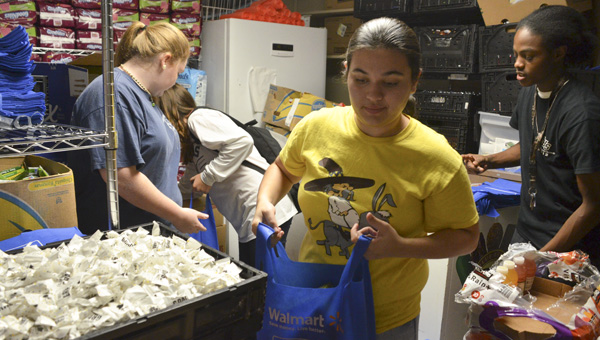 Students from the Fellowship of Christian Athletes (FCA) at Jemison High School volunteered their time to help families in need on Friday.

Fifteen students helped pack boxes of food for Thanksgiving at the SonLight Center in Jemison.

“This year we discussed in FCA how we wanted to work on helping different people out in the community,” Jemison sophomore Anna Wilson said. “We have several different projects going on but we wanted to come help those in need by making sure they have a good Thanksgiving this year.”

“It means a lot to us,” Cole said. “There are a lot of families in this community and other communities throughout Alabama who are hungry and won’t have a table filled with food this Thanksgiving. Having the students come really helps instill that life is about giving and not receiving.”

The students were given the task of packing cardboard boxes with different foods equaling 40 pounds for families to pick up Saturday morning at the center.

Oldroyd said in addition to the boxes of food, each family would receive a free turkey for Thanksgiving.

“We want to help as many families as we can have a good Thanksgiving holiday,” Oldroyd said. “We will serve about 100 families tomorrow who will come in and pick up their boxes with different canned goods.”

SonLight provides non-perishable food to those in need and now partners with Feed the Children which was founded in 1979 and partners with more than 1,200 local agencies, including food pantries, churches and soup kitchens to distribute meals and necessities to more than 400,000 families nationwide.

Senior Courtney Burnette volunteered to help fill “bags of blessings” that will be distributed to seniors and children in high-poverty counties such as Wilcox and Perry.

“As Christians, this is what we are called to do,” Burnette said. “We are called to minister to those who are less fortunate and when we are all sitting around our Thanksgiving tables with a ton of food, it is good for us to remember that some people don’t have that.”

The bags of blessings often include boxes of Kleenex, juice, candy, fruit, vegetables and meat.

In addition to unloading and loading food on trucks the center owns, the center also invites church involvement in leading worship services and providing meals on Saturday mornings.

Oldroyd said Union Grove Baptist Church would be bringing soup and chili on Saturday for the families visiting the center.

“There are a lot of families who don’t have anything to feed their families,” Oldroyd said. “Plenty of them are here in Chilton County and we want to offer the support of letting them know we are here.”

Junior Raeshon Jones said his grandmother brought him to help feed those less fortunate as a child and he enjoys volunteering.

“I have been doing this since I was a little kid,” Jones said. “It means a lot to know you can help others have a good holiday.”

Jemison FCA leader Robert George said he brought his students to let them see what giving is all about.

“We do several fundraisers but this is a good way for them to spend some time helping those less fortunate,” George said.

Panthers roar on the road at Montevallo