Maplesville to face Linden in Round 3

They knew it was coming.

If the Maplesville Red Devils are to advance past the third round of the Class 1A state playoffs and on toward their goal of the Super Six finals at the University of Alabama’s Bryant-Denny Stadium, they’ll have navigate a Linden roadblock at 7 p.m. Friday.

It’s no surprise. Linden has been Maplesville’s nemesis in recent years, defeating the Devils in their past four meetings, two of those in the third playoff round. 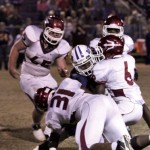 Devonte Morrow (No. 31), Damian Mitchell (6) and the rest of the Maplesville Red Devils will try to slow down third-round playoff opponent Linden this week like they did Geneva County last week. The game begins at 7 p.m. at Maplesville’s George Walker Jr. Stadium.

Sometimes, history can be lost on the teenagers who suit up for varsity football games. That’s not the case this week, Maplesville coach Brent Hubbert said.

“They knew before the season started,” Hubbert said about his players, “if you get to the third, fourth round, the Lindens and the Brantleys, they’re going to be there.”

While Maplesville is unbeaten through 12 games and Linden enters Friday’s contest with a 9-3 record, don’t be fooled. Each of the Patriots’ losses has come to opponents that play in higher classifications (Class 2A Leroy, Class 4A Bibb County and Class 2A Southern Choctaw).

“They’re not any different than what we’ve been seeing,” Hubbert said.

The Patriots will employ a run-heavy Wing T attack on offense to make the most of the talents of quarterback Dewayne Charleston, fullback Prentiss McCuishon and tailback Terrance Sanders.

Of course, the offense’s effectiveness hinges on the play of the offensive line, and Linden’s has been outstanding, especially Jalen Bell and Christien Rogers.

Linden’s coaching staff lines up Bell and Rogers at different positions on the offensive–sometimes on the same side, sometimes not–to create advantages for the running game.

Maplesville’s defense will try to counter by slowing down the rushing attack.

“We’ve been active on defense,” Hubbert said about a unit that has allowed an opponent to reach double-digits on the scoreboard just three times all season–and not since Oct. 11 against Autaugaville. “We’ve been able to find their strength and at least take one part of it away, make them rely on something they don’t like to rely on.”

The MHS offense has been equally effective, scoring at least 41 points against each of its 1A foes.

To keep that streak alive, the Devils will have to find a way to block Rogers, who is an imposing 249-pound linebacker when he switches to the defensive side of the ball.

“He’s a beast in there,” Hubbert said. “They’re very quick, run to the ball well. Sometimes, they’re playing so fast you have to stop the tape to see if they’re playing with 11 or 13.

“We have to make every possession count: move the ball, put points on the board, not miss assignments, not turn it over.”

Despite the ever-increasing stakes and the reputation of this week’s visitor to George Walker Jr. Stadium, Hubbert said the Devils have prepared as they have before every other game this season.

“These kids are very business-like, yet they’re laid-back and loose,” he said. “They know what lies ahead and what opportunity they’ve made for themselves, so just go out and do what you’ve been doing–leave it on the field.”

By Brandon Sumrall | Special to the Advertiser Both of Thorsby’s basketball teams have gotten off to hot starts to... read more