Panthers roar on the road at Montevallo 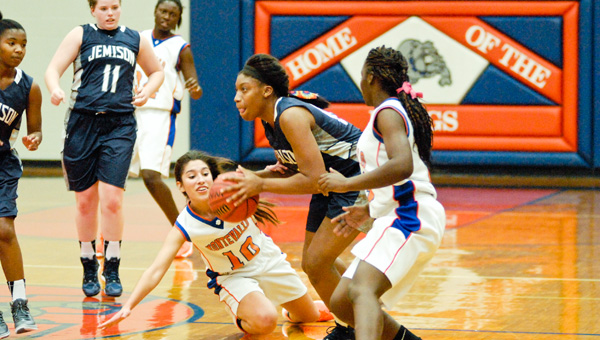 Bulldogs bitten: Jemison’s girls basketball team pulled out a 63-56 win at Montevallo on Tuesday. The Panthers boys team wasn’t as successful, falling to the host Bulldogs by a 50-32 score.

Despite an early advantage, the Montevallo Bulldogs’ girls basketball team fell to Jemison, 63-56 on Tuesday.

The Bulldogs were able to race out to an early 14-6 lead, thanks in part to the shooting of Isabel Gallo. The lead was short-lived, however, as the Panthers went on an 11-0 run to pull ahead, 17-14. The Panthers worked their way to the lead on the free throw shooting of India Satterfield and Laura Vinzant.

The Dawgs struggled to put points on the board, managing just three more before half, while the Panthers took control of the game. Jemison took a 23-17 lead into the intermission.

After the half, Jemison put on a shooting clinic. Vinzant was on point, sinking three straight three’s to break the game open. Vinzant, along with a two-point play from Satterfield and a three from Zanquese Johnson, widened the lead to 37-22 midway through the third quarter.

Montevallo gained ground offensively on the Panthers, as Myshael Thompson posted 10 points in the third quarter alone, closing the score to 46-34 headed into the fourth.

Just as it appeared Jemison had the game locked away, Montevallo came roaring back. A 10-6 run had the Bulldogs in business, and the momentum fully swung Montevallo’s way following a huge steal and layup by Gallo. The shot made the score 52-48, and following a bank shot by Dara Cook, the Dawgs pulled within two.

Unfortunately for MHS, it was as close as the squad would get to the lead, as Jemison pulled away down the stretch, taking a 63-56 win.

The Montevallo Bulldogs boys’ basketball team used great perimeter shooting and strong defense to take a 50-32 win over the Jemison Panthers on Tuesday.

The two squads went back-and-forth early, swapping the ball in a defensive battle for most of the first quarter. At the end of the first period, the Dawgs saw themselves behind, as Jemison took a 9-7 lead following a Keyshawn Jemison three-pointer.

Everything changed with the first basket of the second quarter, however, as Wyatt Allen sank a three from the corner to put Montevallo up 10-7. The Dawgs then went on a three-point frenzy, as Tae’ Smith followed Allen’s lead with a three of his own. Da’Jion Young followed suit and Smith sank another to put MHS up 19-11. Antwain Cunningham added four points to help the Dawgs take a 23-11 lead into the half.

Following the intermission, Montevallo came out firing again, as an alley-oop dunk by Bobby Anderson riled up the crowd and set the tone for the rest of the game.

Young, Smith and Anderson took turns scoring, and the Dawgs led 32-12 midway through the third.

Not to be deterred, Jemison went on a run of its own, out-scoring Montevallo 11-2 down the stretch. B.J. Kornegay, Randy Satterfield and Julian Lucas all combined to cut the lead to 34-23 at the end of the third quarter.

The Bulldogs again relied on a big play to begin the fourth quarter, this time when Smith sank a three to put MHS up 37-23.

With the Dawgs in the bonus, the fourth quarter became a free throw shooting contest, as Cunningham, Smith, Anderson and Cortez Williams all went to the line early in the quarter. What began as an 11-point lead quickly grew into a 20-point lead, as Montevallo’s strong free throw shooting put it up 44-24 midway through the fourth.

Despite a push toward the end of the game, including a deep three by Lucas late in the going, Jemison could not surmount a comeback, falling 50-32.

By Christopher Graber | Special to the Advertiser Editor’s note: Below is a compilation of the statistics and achievements compiled... read more