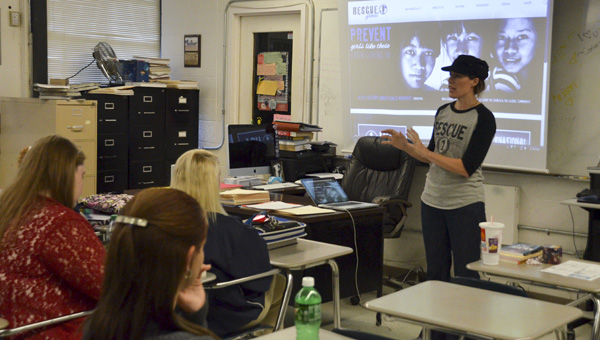 The founder of Rescue 1 Global from Nashville, Tenn. Lacy Tolar talks to a group of students at Jemison High School Tuesday about human trafficking.

Becoming a voice for the voiceless is one of the goals for the Rescue 1 Task Force at Jemison High School.

The group of about 10-12 students started meeting in October to raise awareness concerning human trafficking in the United States and abroad.

Senior Ashland Blankenship spearheaded the group after learning about Rescue 1 Global, an organization based out of Nashville, Tenn. that spends time educating and raising awareness about human trafficking.

“I wanted to start the group to educate others about what is going on,” Blankenship said. “People are amazed this type of stuff happens and everyone is willing to help out and do something about it.”

The group held a Human Trafficking 101 event Tuesday afternoon at Jemison High School with founders of Rescue 1 Global including husband and wife team Lacy and Daniel Tolar and Rich Powell.

The three talked to students about human trafficking including labor trafficking that often happens on farms with individuals who look for cheap labor.

Lacy Tolar asked the group for a show of hands of how many own a smart phone with nearly everyone in attendance raising their hand.

Warning of the dangers of online chat rooms, Tolar encouraged the students to avoid them due to a large rise of online predators.

“When you sign on a chat room and think you are speaking with someone that is giving every appearance they are nice, there is a pretty large chance they are not who they say they are,” Tolar said. “They can often look on your Facebook or Twitter page and see if you are sad or just had a fight with your mom and they will prey on those emotions. Traffickers find vulnerabilities and they prey on them.”

The Rescue 1 Global group often rescues women being used in human trafficking to the WellHouse in Birmingham, the only 24-hour shelter offering immediate housing assistance to women.

Tolar asked the students involved in the Rescue 1 Task Force to help gather supplies to donate to various rescue shelters for those involved in human trafficking.

The group will work to collect toiletries such as toothbrushes and soap to donate to Rescue 1 Global who will distribute the items to the shelters.

“We hope you will help educate others in your community about what is going on in the world right now,” Tolar said. “As you grow up and branch off into your careers, you can help others learn about this and help bring about change.”

“We just want to raise awareness,” Blankenship said. “Everyone has been very receptive at school and when you tell them about this, they want to help.”

A group of students participated in the Chilton County beef cook-off competition Tuesday.In addition to the cook-off, students were challenged... read more