Both of Thorsby’s basketball teams have gotten off to hot starts to begin the 2013 basketball season as they picked up their third straight wins on Tuesday night on the road at county rival Isabella.

The games were the first of the season for both of Isabella’s teams.

The varsity girls got the night’s action started with the Rebels picking up the win, 64-53. 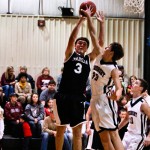 The Rebels jumped on the Mustangs early, going on a 6-1 run to start the game and ending the first period with a 17-11 lead.

The Mustangs drew to within three points of the lead to close out the first half and went into halftime trailing the Rebels, 32-29.

The third period would prove to be the difference in the game as the Rebels out-scored the Mustangs 21-7 on 64 percent shooting from the field.

Despite a 13-point effort in the fourth period by Mustangs guard Savannah Higgins, the Mustangs would ultimately come up short.

A tough night of shooting and a stingy Rebel defense proved to be too much for the Mustangs as the Rebels varsity boys picked up their third win of the season, 51-14.

A 0-for-12 shooting performance by the Mustangs in the first period would see them trailing 11-0.

Shooting better than 50 percent during the first period, the Rebels cruised to a 34-2 halftime lead.

The trend would go unchanged as the game moved to the second half with the Rebels out-scoring the Mustangs 17-12 on their way to the victory.