A 22-year-old Jemison woman will spend the next year in prison, and must register as a sex offender for the rest of her life after she pleaded guilty to two counts of first-degree promoting prostitution on Nov. 18.

Brittany Michelle Pruitt, who lists an address on Chilton County 42 in Jemison, entered the pleas during a hearing in the Shelby County Courthouse, and was sentenced by Circuit Court Judge Dan Reeves. 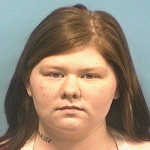 Through a plea deal, Pruitt’s original 10-year prison sentence for each count of promoting prostitution was reduced to one year in the Alabama Penitentiary and five years of supervised probation after her release from prison.

The two sentences will run concurrently, and Pruitt received credit for 64 days of jail time served before she was sentenced.

Pruitt was arrested by the Pelham Police Department in April 2012 in connection with a prostitution ring involving girls younger than 16.

When officers arrived at the scene, they interviewed witnesses and determined Pruitt was involved in prostituting multiple girls, some of whom were younger than 16, Folmar said.

Pruitt’s sexual abuse charge was dismissed as part of her plea agreement.

Wilsonville resident Chelsea Marie Joiner also was arrested and charged with five counts of first-degree promoting prostitution in connection with the case.

The Chilton County Board of Education elected officers for 2014 on Tuesday. Board president Lori Patterson was re-elected president. Patterson... read more