Fresh off of wins on Saturday evening at home against Marbury, the Chilton County High School basketball teams split two games on Monday, with the varsity girls losing, 48-35, and the varsity boys picking up their second straight win of the season, 76-55, over the Alabama Christian Academy Eagles. 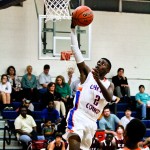 Lay it in: Jamarcus Williams recorded 14 points and three steals in Chilton County’s win over Alabama Christian on Monday.

Both teams struggled to find the basket in the second half, with the Eagles adding slightly to their lead at the half, 31-18.

The Tigers’ defense slowed down the Eagles through the third period, but the hosts weren’t able to close the gap as the Eagles continued to lead at the end of the third, 36-24.

The Tigers (1-1) drew to within seven points of the Eagles (1-0) midway through the final period, but the Eagles would close with an 8-0 run on their way to the victory.

Keona DeJarnett and Gabriel Kelley led the way for the Tigers. DeJarnett accounted for 14 points, three rebounds and two blocks. Kelley added 13 points and five rebounds while shooting 3-of-7 from downtown.

The CCHS varsity Boys got out to a hot start in the first period, shooting 66 percent from the field, including 2-of-3 from behind the arc, on their way to a 21-10 first period lead.

The pace wouldn’t change much during the second period with the Tigers (2-0) continuing to shoot 55 percent from the field and 60 percent from three-point range.

With the Tiger defense stifling the Eagles (0-1) to just 27 percent shooting in the first half, they took a 43-17 lead to the locker room at the half.

With a comfortable lead and just 10 seconds to play, Braylen Parker received an alley-oop pass on a Tiger breakaway for his second dunk in the closing seconds to put an exclamation point on the Tigers win.