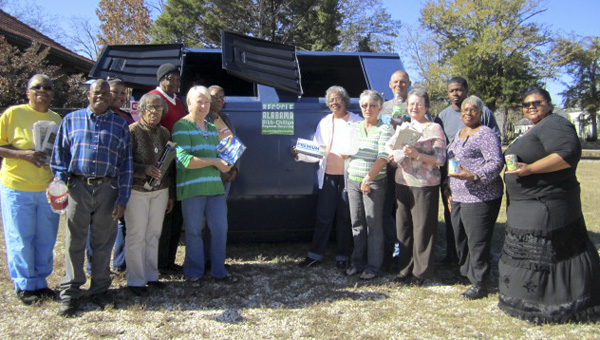 Three out of the five recycling collection containers installed in Chilton County one month ago have already been emptied of their contents.

Chilton County recycling liaison Gay West said the first month has been successful with most of the locations receiving items to be recycled.

“They are going to start weighing the different bins to see how each one is doing,” West said. “A lot of them are doing really well and we are very pleased.”

The recycling program is a collaborative effort between Bibb and Chilton counties and will benefit the Alabama Department of Corrections (DOC) in Montgomery where the materials are sorted and processed.

The Bibb County Commission originally applied for a grant from the Alabama Department of Environmental Management (ADEM) for the project that would partner with the DOC.

Under the agreement, the county would allow the DOC to place recycling bins throughout the county. Bibb County would collect the material for both counties and transport it to DOC in Montgomery.

The DOC will reap any financial benefits from the material so the prison system can utilize the material for the use of the facility.

Since Bibb County needed more population numbers to receive the grant, they deiced to partner with Chilton County.

The program does not cost anything for Chilton County and the benefit to partnering with Bibb County is waste at the transfer station in the county should be reduced.

Out of the 15 recycling containers covered under the grant, Chilton received five and the bins were distributed throughout the county in October.

West said most of the locations have already been emptied with the contents collected and transported to DOC.

The two locations with the least amount of recyclables collected so far have been in Maplesville and Jemison.

Although West said there could be different factors for why the two bins have not collected as many items to be recycled as the rest in Chilton County, she is working to spread the word of the two locations in hopes more people will participate.

“I think some people just didn’t know the bins were ready to receive materials,” West said. “We have also heard some feedback that some people don’t know what to put inside the bins so we are working to spread the word.”

The locations of the five bins in the county include:

•Two bins are at the former Clanton Recycling Center in Clanton at 810 Furniture Ave.

•One bin in Thorsby behind the former Wood Drug Store at 8980 Jones Street.

West and Bibb County recycling liaison Matt Hartzell said most of the items in the containers that have been collected have been plastic or paper and individuals are contributing recyclable materials with non-recyclable waste received.

“I have been very pleased with the response so far,” West said.

Items accepted in the containers include:

Items that are paper can be dropped off inside of the bins but items including plastic, aluminum or metal must be lightly rinsed.

The rinsing helps rid the possibility of unwanted pests and undesirable smells at home prior to recycling.

All plastic bottle tops must be discarded before being placed in the bins.

According to a pamphlet distributed by the Alabama Cooperative Extension System, the benefits of recycling are listed as recycling conserves natural resources, saves landfill space and saves energy. Alabama law now requires that counties and cities develop comprehensive solid waste management plans, which include waste reduction and recycling goals.

For more information about the program, visit www.aces.edu/bibbchiltonrecycling.

For brochures on the recycling program and more details, call West at 280-6268.