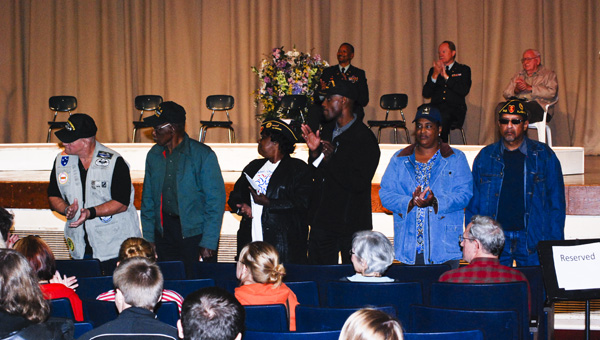 Local veterans stand as they are applauded for their military service at Verbena High School’s Veterans Day Ceremony on Friday.

Early Popwell, a Korean War veteran, spoke to students, faculty and fellow veterans about his military stints in Korea and Japan.

Popwell said he enlisted in the United States Army in 1947 at age 18. 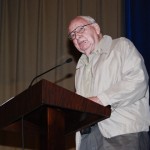 World War II veteran Early Popwell speaks to an assembly at Verbena High School on Friday about his time in the U.S. Army.

Although he had a close call with a sniper once, Popwell said he was never in combat.

“I’m glad to be able to speak to all of these students,” Popwell said.

They thanked all of the veterans who attended Friday’s ceremony and honored fallen military servicemen in a PowerPoint presentation.

“I ask the students at this time to recognize the history that’s in front of you by giving these veterans a round of applause,” Swindle said. “Some paid the ultimate sacrifice in serving their country in the way they do.”