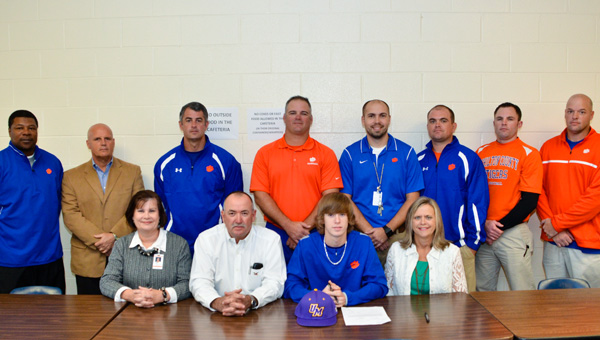 Morgan said he grew up a fan of UA baseball.

“It’s real neat being able to play for your home-state school,” Morgan said.

Morgan said he’s excited about the Crimson Tide program constructing a new stadium. He said he wanted to get the signing out of the way so he could focus on his senior season.

Morgan’s varsity career began as a 13-year-old at Isabella.

He was first named to The Clanton Advertiser’s All-Area team as an eighth grader and has since received various other recognitions, including playing for Team USA in the USA Gold Medal Games, being named to the Alabama All-State team and playing in the East Coast Pro Showcase.

Morgan has played in 149 consecutive games for Thorsby and compiled a .460 batting average, 14 home runs, 170 runs batted in and 30 stolen bases.

The website Perfect Game USA ranks Morgan the No. 1 catcher and No. 4 overall player in Alabama, and the No. 24 catcher in the nation.

“It’s been a very rewarding journey with Matt to watch him grow as a player and a person,” Thorsby coach Ab Argent said after the signing. “Today is a reward for all his hard work. The big thing is this opportunity to further his career plus receive a good education.” 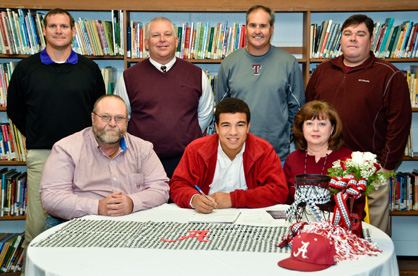 Thorsby baseball player Matt Morgan (seated, center) was joined at a signing ceremony by Thorsby coaches and administrators as well as parents Greg and Sheila Morgan.

Minor has started at shortstop for CCHS since his freshman year, and Tigers coach Josey Shannon said he remembers people doubting whether he was making the right decision in putting the inexperienced Minor at such a demanding position.

“I threw him in the fire real young,” Shannon said. “He made me look like a million bucks.”

Minor boasts a .989 fielding percentage and a .365 batting average.

He said Montevallo coaches will likely use him in the middle infield.

“I like the campus and the tradition there,” Minor said. “I owe everything to my family and coach Shannon–and also my teammates.”

Up for grabs: Thorsby’s Sabrina Ellison (15) fights with Verbena’s Makaylie Kelley (3) and Alyssa Evans for the basketball during... read more