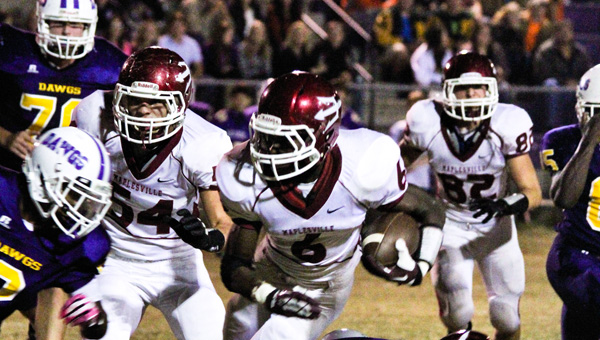 The Maplesville Red Devils took to the road on Friday night, making the three-hour bus ride to Hartford to take on the Geneva County High School Bulldogs in the second round of the Class 1A state playoffs.

The two teams have had three previous meetings with the Red Devils holding a 3-0 record over the Bulldogs.

After winning the coin toss and electing to receive, Bulldogs running back Ulysses Green took the hand off over left tackle and scampered 40 yards to the Maplesville 34-yard line. Facing a second-and-goal from the 12, quarterback Skylar Pensyl’s pass fell into the hands of Red Devils defensive back Anthony Moore, ending the Bulldogs’ drive and setting up the Red Devils’ opening drive from their own 4.

With the first Maplesville (12-0) offensive play of the game, quarterback Colby Chambers found Chase Girlie for a 46-yard completion down to the midfield stripe.

Nine plays later, with a first-and-goal from the Bulldogs’ 3-yard line, Damian Mitchell capped off the drive with a three-yard touchdown run.

With Chambers’ point-after through the uprights, the Devils led 7-0 late in the first quarter.

Chambers added two scores, one on a six-yard touchdown run and another on a 15-yard strike to Trevor Wallace in the end zone.

Mitchell added his second score of the game, this time from five yards out, and the Red Devils went into the locker room up 28-0.

The second half began much the way the first half ended: with the Red Devils in the end zone, this time on a Chambers one-yard run to give the Red Devils a 35-0 lead midway through the third quarter.

After three-and-outs by both teams, the Red Devils added one more score on the night, this time via a Chambers to Kendarius Bradley 31-yard touchdown pass to bring the score to 41-0.

The Bulldogs (9-3) scored their only touchdown late in the fourth quarter on a Nicholas Carroll 46-yard touchdown carry to bring the game to its final score, 41-7.

“We were a little sloppy, but it was a big win for us” said coach Brent Hubbert, who picked up his 100th win as head coach of Maplesville. “It’s a fun place to coach. We have a lot of very special players.”