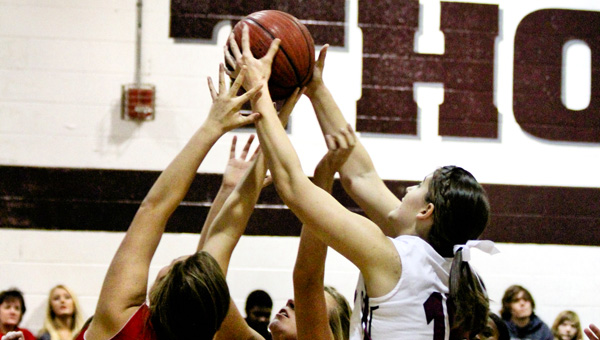 Up for grabs: Thorsby’s Sabrina Ellison (15) fights with Verbena’s Makaylie Kelley (3) and Alyssa Evans for the basketball during Tuesday’s game.

With football season coming to a close for most schools across Chilton County, the Verbena Red Devils and Thorsby Rebels got together on Tuesday evening to officially tip off the start of the high school basketball season.

The varsity girls started off the evening’s action with the Rebels picking up the win over the Red Devils, 55-16.

The Rebels went on an early 13-0 run before Makayla Mims hit a three-pointer at the first period buzzer to give the Red Devils their first points of the game and make the score 13-3 Rebels. 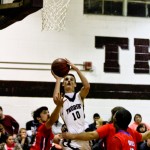 On the attack: Thorsby’s Cameron Castleberry shoots over the Verbena defense.

The Devils had a tough time slowing down the Rebel offense in the second period as Thorsby took a 24-5 lead to the locker room at the half.

The pace wouldn’t change much through the third and fourth periods as the Rebels cruised to the win.

The Rebels varsity boys’ first win would not come quite as easily as their female counterparts as it would take a Darius Davis three-pointer with just 10 seconds to play to give the Rebels a 49-46 win.

Tyler Owens would sink a free throw late in the second period to give the Rebels the lead at the half, 18-17.

The two teams battled back and forth throughout the final period, with Cameron Castleberry hitting a free throw for Thorsby to knot the score at 44-all with just over a minute to play.

With just 11 seconds remaining, the Rebels inbounded the ball on their side of the court to an open Davis, who drained a long-range jumper from the left baseline to seal the victory for the Rebels.

Davis led the Rebels with 19 points, including going 4-of-8 from behind the three point line, to go along with four rebounds and three steals.