Any parent would agree that a child is a life-changing addition to a family.

Instead of nine months to pick out a name, purchase the needed supplies and create a nursery, what if one phone call heralded the new addition?

Adoptive parents, like Traci and Zack Bates, know that with an adoption, the process for obtaining a child is different from what most are used to. But November being National Adoption Month—and the upcoming one-year anniversary of when they brought home their little Rebecca Hope—offer a chance to think about their thankfulness. 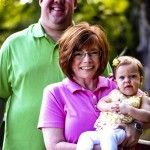 Addition to the family: Zack and Traci Bates brought home Rebecca Hope on Nov. 16, 2012, from a Lifeline office in Meridian, Missl, concluding an adoption process they began in 2008. Becca celebrated her first birthday last month.

The couple attended a “Hannah’s Prayer” support group, organized by the Chilton Baptist Association for couples dealing with infertility issues.

Lifeline Children’s Services gave a presentation to the group, and Zack, who had not been in favor of adopting, was convinced.

“I was never sold on adoption until then,” he said. “It was God revealing to me, adoption is a picture of what you can do for a child. God does the same thing for us–he takes us in.”

The process began with an extensive application and desired child form, which asks about preferred sex, race and more.

Then, the couple is assigned a social worker and undergo fingerprinting and a background check. A home study is conducted to ensure the couple’s home is fit for a child.

Traci and Zack each wrote a biography about themselves and underwent yearly medical exams.

The information is gathered as part of a profile of the couple that is shared with mothers or families giving up their children for adoption. The child’s parents can choose which couple they would prefer adopt their child.

After the profile was compiled, Traci and Zack were in a sort of waiting mode, as their profile was passed along.

Being patient was difficult, the couple said.

“You just have to go on and live your life like you normally would,” Traci said. “We were pretty patient.”

Zack is pastor at Northside Baptist Church and a sales representative at The Clanton Advertiser. Traci, a former Advertiser employee, works at the Chilton-Clanton Public Library.

The couple remembers arriving home on Halloween, Oct. 31, 2012, and having a message from Lifeline, which was a fairly regular occurrence. Traci celebrated a birthday just the day before, so they assumed the phone call was their social worker sending along best wishes.

Zack remembers brushing off the call, certain that it was not about a prospective child.

The social worker wished Traci a happy birthday and then said, “We’ve got a baby for you.”

“I was sitting down, and it was a good thing because I probably would’ve fainted,” Zack said.

Traci and Zack brought Becca home on Nov. 16, 2012, from a Lifeline office in Meridian, Miss. The reactions of family and friends are imprinted on their memories.

They describe Becca as smart and strong-willed. With parents who are both avid college football fans, little Becca has already learned how to signal “touchdown.”

Traci and Zack point to indications that Becca was meant to be part of the family, such as her sharing a birthday with Zack’s maternal grandfather and the fact that Becca’s foster parents were already calling her Rebecca—a name Traci and Zack picked out long ago.

But the couple trusts that God arranged the union.