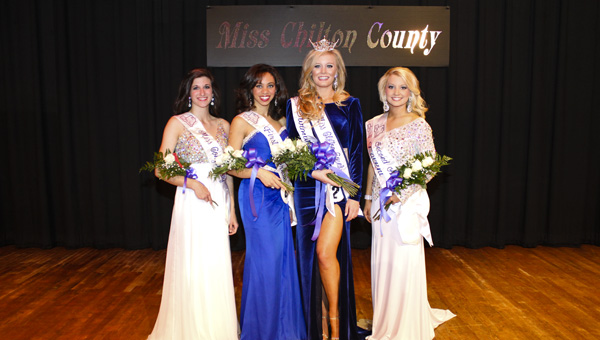 Katie Hilyer was named Miss Chilton County and winner of the swimsuit competition. 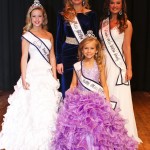 As the reigning Miss Chilton County, Hilyer said she plans to compete in the Miss Alabama Pageant in June 2014.

The significance of Hilyer’s participation in Miss Alabama is that this marks the first year the Miss Chilton County Pageant is set up to serve as a preliminary to Miss Alabama.

Hilyer, 21, will follow 2012 Miss Chilton County Kandice Cleckler in competing at the state level with the backing of her hometown.

“I really wanted to represent Chilton County in Miss Alabama,” Hilyer said. “I thought that’s the best of both worlds: I get to not only go to Miss Alabama, but I get to represent a place I know will support me and my platform, the Wounded Warrior Project. Plus I have a court, which not everyone has.”

Hilyer is the daughter of Elizabeth Ginsburg and Jimmy Hilyer.

She attends the University of Alabama, where she is a Crimsonette in UA’s Million Dollar Band.

As in the Miss Chilton County Pageant, Hilyer said baton twirling would be her talent for Miss Alabama.

Along with preparing for her interview and building her wardrobe, Hilyer said she would further develop the platform she chose, which is a veterans service organization that provides programs and services to injured service members.

“It was something that I thought as being a really good opportunity to spend my time on,” Hilyer said. “There are a lot of veterans in Chilton County that I think use the help of Wounded Warriors Project. I don’t even think of it as my platform; I think of it as my job. I want to help in the best way that I can.”

The Miss Chilton County Pageant launched in 1989 as a program to promote the county and provide scholarships for winners in each age division.

The Clanton Evening Lions Club sponsors the pageant and provides scholarship money to the winners.

Since Miss Chilton County is a Miss Alabama preliminary, the club has started offering an additional $1,000 to the queen in the Miss category to assist with her expenses while competing in Miss Alabama.

Miss Chilton County Pageant director Diane Calloway said this year’s pageant went smoothly, even after organizers had to adjust age categories to mirror those in Miss Alabama and spread the pageant over two days.

Calloway said a Miss Alabama representative was onsite for the pageant to make sure it adhered to all state-level pageant rules.

“It was a great experience, and I appreciate the support from the girls, their parents and the community,” Calloway said. “It’s a group effort to make something like this work on this scale.”

Season ends on the road for four local teams

Standing in their way: Randy Satterfield (1) and his Jemison teammates ran into a roadblock Friday in the form of... read more