Red Devils dispatch Marengo in Round 1 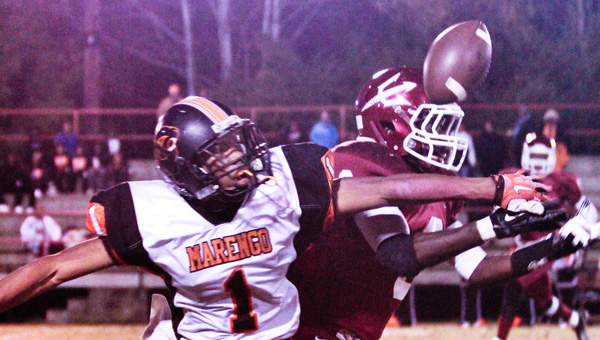 Those words have become not only a slogan but a way of life for the Maplesville football team. After an early upset loss in the state playoffs a year ago, the Red Devils have refused to underestimate any opponent.

Coming into Friday night’s match-up with the Marengo Panthers in the first round of the Class 1A playoffs, the Red Devils have out scored their opponents 558-87, including three by shut-out.

The Red Devils picked up their fourth shutout of the season with a 62-0 win over the Panthers.

The Red Devils (11-0) scored early and often, finding the end zone on every possession during the first half.

Colby Chambers was the first to find the end zone for the Red Devils, from 12 yards out, and would also add the extra point to make the score 7-0.

Damian Mitchell went in from 48 yards out to make it 14-0 Red Devils.

Chambers found Chase Girlie for a 23-yard touchdown, and Devonte Morrow went in from the 1-yard line on the next Maplesville drive to make the score 28-0 early in the second quarter.

Mitchell added two more scores during the second quarter on runs of two and 14 yard, and a Jerry Nix three-yard touchdown run gave the Red Devils a 49-0 lead at the half.

The Red Devils kept things going to start the second half as Trevor Wallace scored on a two-yard run on their first possession of the third quarter to make the score 56-0.

The Panthers (5-6) drove deep into Red Devil territory late in the third quarter, but four plays inside the Red Devils 10-yard line resulted in no points on the board for the Panthers.

With 9:16 left in the fourth quarter, the Red Devils added their final touchdown of the evening on a Nix 10-yard touchdown run to bring the game to its final score.

“The kids played hard, they executed well and did what we asked them to do,” Maplesville coach Brent Hubbert said. “It’s a one-game season again; hopefully we can continue on this path.”

Chambers led the Red Devils rushing attack with 123 yards on 10 attempts, and added 165 yards through the air on eight completions in 11 attempts.