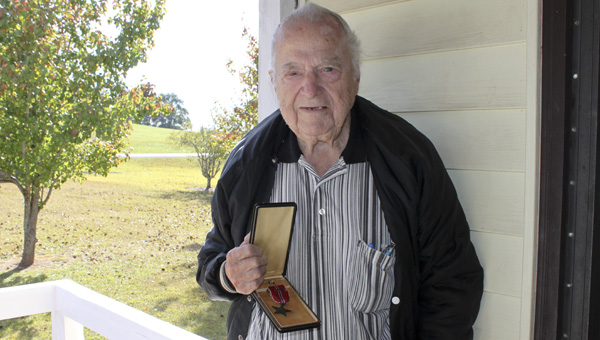 Forest Elmore, 91, enlisted in the United States Army on Dec. 7, 1940, shortly after he turned 18 years old and was awarded a Bronze Star for the B-17 he worked on that flew 57 missions without any mechanical trouble.

Although Forest Elmore doesn’t like to talk much about his time serving in the Army during World War II, Veterans Day means a lot to him each year.

“The war is hard for me to talk about,” Elmore said. “I can still see a lot of those images in my mind, and there was a lot of bad stuff that happened during the war. Veterans Day will always be special to me, though. It is a day you stop and remember some of those times.”

“I knew I could get $21 a month if I joined the Army, and we had just come out of the Great Depression, so that was a lot of money back then,” Elmore said.

Born in Florida and raised in Nebraska, Elmore lived in Illinois and trained as an air mechanic before ending up at Gunter Field, which is now Maxwell Air Force Base in Montgomery.

It was in Montgomery he met his future wife, Kathryn — or Dene, as her family calls her — when a group of soldiers were asked to attend a church party with a group of girls from a business school.

“We were both invited to the party,” Dene, 91, recalled. “Neither one of us was very good at dancing so we ended up talking and we have been together ever since.”

Elmore and Dene were married in 1943 shortly before Elmore left for Europe to fight in the war.

“That was the hardest time for both of us,” Dene said. “While he was overseas I stayed with my parents in Thorsby and wrote him a letter just about every day.”

While overseas, Elmore went to England for 18 months with the Army Air Corps where he was the crew chief on a B-17 bomber.

Elmore said his primary responsibility was making sure anything on the aircraft was fixed and ready to fly a mission, which involved patching holes, changing tires and fixing any mechanical issues.

“Anything that happened on the aircraft I had to fix,” Elmore said. “I had a helper alongside me but I was the only one in charge of the aircraft.”

Elmore’s group, the 452 Bomb Group 728 Squadron, flew most of its missions during the daylight hours and Elmore worked on the planes at night.

Altogether, the squadron flew 250 missions over Germany and France.

Third graders Jack Ellison, Isaiah Davidson and Mattie Cleckler point to the photographs of their relatives on the veterans’ honor... read more