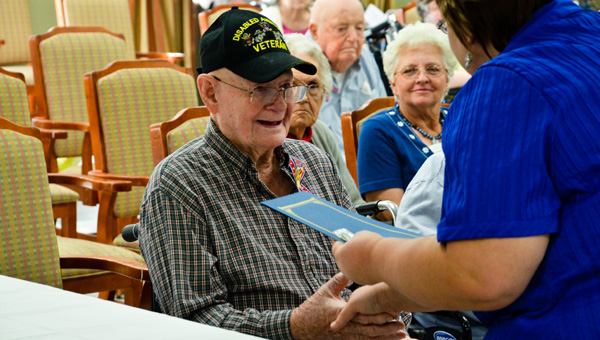 Deserved recognition: Lewis Brown, a resident at Hatley Health Care, was one of several veterans recognized at a special service on Thursday.

Local veterans at Hatley Health Care were recognized Thursday leading up to Veterans Day on Monday.

Hatley and SouthernCare Hospice co-sponsored the event at the assisted living facility.

After a welcome by Lance Bolding, administrator at Hatley, SouthernCare volunteer Andy Rice gave the invocation, then Hannah Tierce sang the National Anthem while the Civil Air Patrol posted the colors.

Robert Horton, public information officer for the Alabama Department of Veterans Affairs, spoke at the event for the second consecutive year.

“Today we celebrate our veterans, past and present, and we thank all of you who are here today,” Horton said. “As far as I’m concerned, every day is Veterans Day.”

“May God bless each one of you and your families,” Wallace said.

Each veteran in attendance was given a “Certificate of Honor” from The American Legion that read:

“In recognition and grateful appreciation for serving in the United States Armed Forces in the name of freedom and democracy, and for allegiance to God and country in courageously protecting our liberty and independence.”

SouthernCare also presented certificates thanking the veterans for their service and sacrifice.

Two of the veterans, Cunningham and Noah, served in World War II.

“Thank you for your service and for giving us the freedoms we enjoy today,” Bolding said.