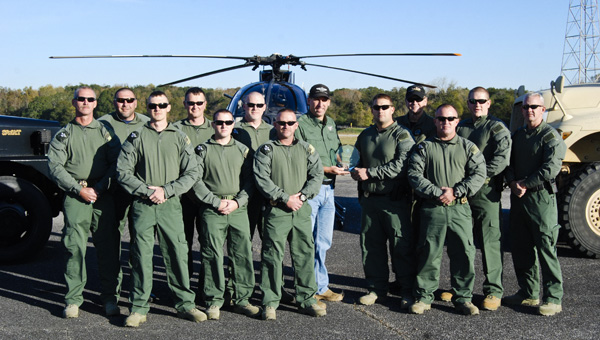 The Chilton County Sheriff’s Department’s SWAT team ranked No. 1 for its performance at a statewide conference last week.

All 12 officers on the county’s SWAT (Special Weapons And Tactics) team participated in training and training competitions at the 2013 Alabama Tactical Officers Association Conference held in Foley, Orange Beach and Gulf Shores.

“During the day, people go to different training courses that are pertinent to their specialty,” Sheriff’s Department Investigator Erric Price said. “At night is when the competitions are held. Competitions consist of real-world scenarios that a team might face in their own community.”

Other events included a timed Ironman competition in which each team selected its fittest person to complete different tasks and shoot a shotgun, rifle and handgun; a bus assault scenario in which 12 hostages were trapped on a school bus with two “bad guys;” an accuracy event testing officers’ proficiency with a rifle and handgun; and a sniper-initiated entry in which the sniper and entry team came together, the sniper had to make a shot in the dark and the entry team had to go into a scenario house and rescue a hostage and eliminate the “bad guys.”

Price said a highlight of this year’s conference was when the FBI did presentations about the mass shooting in an Aurora, Colo. movie theater in July 2012 and the Midland City school bus shooting and hostage situation in January.

“This is the biggest training seminar we do each year,” Price said. “It’s really good for networking with other SWAT teams. It’s a good week to get together and brainstorm about the previous year and how we can get better.”

Chilton County’s team has attended the conference almost every year since the team formed in the early 2000s.

The 12 officers on the team consist of a commander, team leader, medic, two snipers and entry members.

For achieving the No. 1 spot at the conference, the team received a crystal acrylic laser-engraved trophy that will be on display at the sheriff’s office. 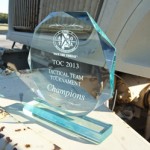 The trophy the SWAT team received for winning the ATOA competition will be on display at the sheriff’s office.

“This is an outstanding group of men who train hard to provide this service to the people,” Sheriff Kevin Davis said. “I’m very proud of them. Competing is secondary; the most important thing is the training they receive. They are a team, and they perform as a team.”

Price is the chaplain for ATOA and presented a devotion about living up to one’s highest potential and leaving a legacy.

Chilton’s team brought back more than $2,000 worth of free equipment to be used in future training and callouts.

“Our SWAT team on average has around 15 callouts a year,” Price said. “A lot of people see the equipment we have and the training we get and the armored vehicles we have. A lot of our equipment is donated and given to us through the [DRMO] government program. Both armored vehicles came through programs to where they were free.”

Price said the SWAT team uses armored vehicles when suspects are thought to have weapons or when officers must retrieve people from areas where shootings have occurred or could occur, such as schools.

Victims of a shooting may be transported from the scene to an ambulance via armored vehicle to prevent the ambulance from being shot.

“Armored vehicles are used when we believe that the call we’re going on, the person’s going to have a rifle,” Price said. “If we ever needed to evacuate children or other officers that have been shot, our patrol cars will not stop rifle bullets.”

Price said whenever the Chilton team leaves the county to attend the conference, a sister SWAT team is on standby to answer any calls that come in.

“We didn’t leave the county unmanned,” he said. “The 12 guys on the team are just very honored to have the position they’ve been given.”

Every officer on the team must meet the following criteria as SWAT operators: proficient with all weapons, in good physical shape and must be highly self-motivated and willing to take on the most dangerous of all calls and any tasks given without hesitation.

“Our team stands ready to serve, protect and lay our lives down for our school children, neighbors and communities,” Price said. “We are honored to serve Chilton County.”