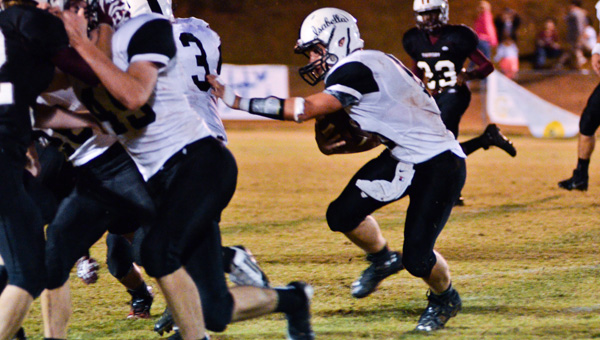 Tyler Smith’s ability to run with the football is well established.

The junior quarterback at Isabella leads the Chilton County area in both rushing attempts (202) and rushing yards (1,405).

Smith has contributed enough to lead the Mustangs to a 7-3 record and a playoff berth.

But what makes the IHS offense scary good is when Smith is also passing the ball effectively, as he did in last week’s 43-6 win over county rival Thorsby.

“We had some people open, and he hit them the other night,” Isabella coach Scott Booth said. “He’s still improving. When we get to where we’re pretty consistent with it, it’ll help us a lot.”

Smith rushed 17 times for 90 yards and two touchdowns in the game and completed five passes in eight attempts for 103 yards and two more scores. He also returned a kickoff 71 yards for a touchdown to tally 264 all-purpose yards.

“He’s our go-to guy,” Booth said. “He’s probably the most consistent player we have. You know you can always count on him to give you everything he’s got.”

Smith’s reputation as a running threat has caused opposing defenses to scheme to stop him.

“Every time we look up, they’re loading the box,” Booth said about opponents focusing on slowing down the run.

The defenses’ approach makes having the threat of the pass so important. Along with Smith’s passing, a group of receivers that includes Christian Littleton, Brandon Chapman, DeRodgus Campbell, Chase Giles and Caleb Giles has also improved.

“We’ve worked on several different things: route running and blocking,” Booth said. “The thing is, you’ve got to come off the ball hot every play, whether it’s a run or a pass, so they can’t read you. You have to be consistent.

“We’ve had some long runs as a result of people staying on their blocks longer.”

•Recorded 15 tackles, one sack and two caused fumbles in a 49-7 win over Jemison.

•Completed two passes in as many attempts for 50 yards and a touchdown in a 29-28 loss to Calera.

•Rushed one time for 46 yards and a touchdown.

•Recorded eight tackles and an interception on defense.

•Added another touchdown on a 23-yard run.