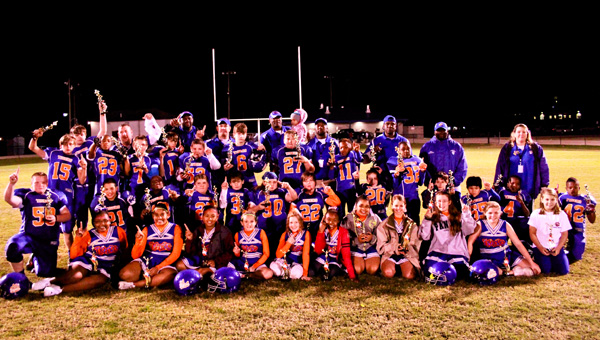 The Clanton Blue Tiger Mites (8-2) faced off against the Verbena Red Devil Mites (8-2) in the first game of the day.

The Red Devils came back to take the lead at the end of the third, 30-26, but a touchdown by the Tigers with 10 seconds to play gave the Tigers the 40-36 win over the Red Devils. 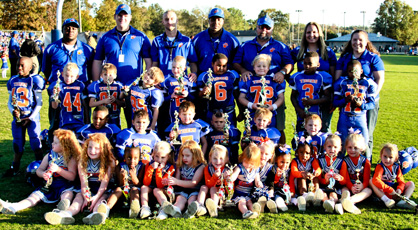 Game 2 of the evening saw the Isabella Mustang Midgets (9-0) face off against the Clanton Blue Tiger Midgets (6-4).

The Mustangs jumped out to an early 12-0 lead in the first quarter, but a late second quarter touchdown by the Tigers cut the Mustang lead to six at the half, 12-6.

The Mustangs added one more touchdown late in the third quarter on their way to an 18-6 win. 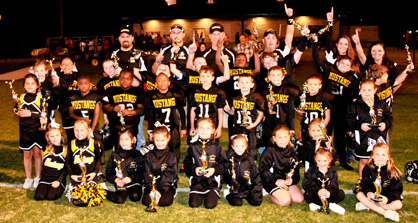 The Minors match-up pitted the Calera White Eagles (6-4) against the Maplesville Red Devils (9-0).

The Red Devils jumped out to an early 16-0 lead at the end of the first quarter and never looked back en route to a 32-6 win and their sixth championship in a row.

In what quickly became a scoring fest, the Thorsby Major Rebels (7-3) and the Clanton Blue Tigers (6-3) slugged it out in the evening’s final contest.

With the Rebels leading 16-14 at the end of the first, the Tigers quickly came back to tie it at 30-all at the half. The Tigers took a 44-36 lead into the final quarter but would be forced to add another late touchdown and a goal line stand as time expired to seal a 50-42 win.

Clanton Blue Youth League officials thanked Michael and Jaime Smitherman for their years of tireless dedication to the league and wished them all the best in their future endeavors.