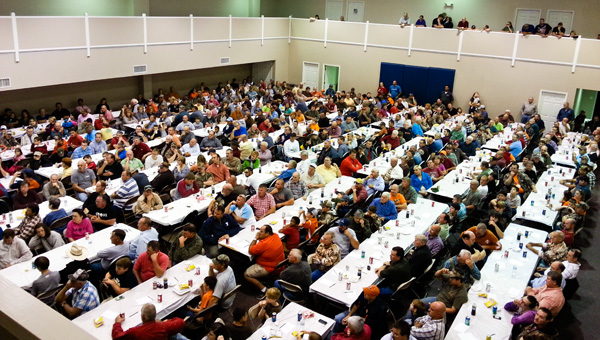 Union Springs Baptist Church could barely accommodate all the people who showed up Saturday for its Hunting Season Kickoff event.

Steve Johnson, pastor at Union Springs, said organizers estimate close to 600 people attended, a record for an event that has been held the past several years.

“We had some folks sitting outside, we had to put some in other rooms–we couldn’t sit them all in the same room,” Johnson said.

Johnson said parking was also an issue, as a church that usually sees 75-100 cars for a worship service was descended upon by about 300 cars.

“It grows every year,” Johnson said. “We’re just kind of at the limit. We might have to figure out something else to do.”

Whatever organizers decide, the event will remain focused on bringing people to the church to hear a religious message.

While the event began as an effort to reach male hunters, women have always attended, and this year the number of females in attendance was near 150, Johnson said.

Kacy Mims approached Johnson with the idea for the event and has remained involved.

“It’s hard to find,” Johnson said and added that Hammond encouraged the men in attendance to lead lives of service.

Chilton County Commissioner and church congregation member Heedy Hayes leads the effort to provide a meal. To accommodate the large number, Johnson said Hayes cooked 175 chickens and had the idea of boxing the meals beforehand.

The result was a meal served to about 600 people in about 40 minutes.

“He cooks a mean chicken,” Johnson said about Hayes.

The final order of business was handing out several thousand dollars worth of prizes, including cash, guns, turkey calls, scopes, tools, rods and reels, knives and gift cards.

Those whose names weren’t drawn for a prize were given a gift bag.

Johnson said more than 70 churches were represented at the kickoff, along with many attendees who don’t have a church home.

“It’s a great outreach event,” the pastor said. “Everybody who comes brings somebody else next time. It has grown exponentially.”