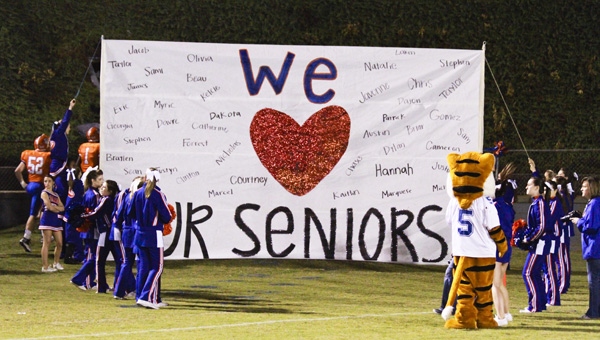 Chilton County High School held Senior Night as the Tigers hosted the Calera Eagles in the final game of the regular season.

The Chilton County Tigers brought their 2013 regular season to an end on Friday night in a nail-biting loss at home to the Calera Eagles, 29-28.

The Eagles offense, led by University of Alabama committment Ronnie Clark, struck first with their third possession of the game when Clark ran in from 23 yards out and Stephen Ellison added the point-after to give the Eagles an early 7-0 lead. 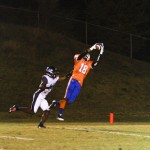 Braylen Parker catches a 20-yard pass for a Tigers touchdown with 1:17 left in the fourth.

The Tigers (5-5 overall, 4-3 region) answered the Eagles’ score with one of their own on a Cade Hatch 49-yard touchdown. Stephen Horn’s point-after tiee the score at 7-all early in the second quarter.

Calera (9-1, 6-1) struck again on their next possession when Shakeith Tyus found the end zone on a 22-yard run. Ellison’s point-after made the score 14-7 in favor of the Eagles.

After possessions by both teams yielded no points, the Tigers offense added their second touchdown of the night on a Hatch-to-Braylen Parker 21-yard touchdown pass. The Tigers went into the locker room down, 14-13.

After their defense forced a three and out, the Eagles offense struck again with Clark finding the end zone from 1 yard out. With the point-after good, Calera led 21-13 midway through the third.

Hatch fielded an Eagle punt at the 50-yard line and returned it to the Eagles’ 12, where two plays later, Bishop connected with Jacob Hatch for a Tiger touchdown. With Horn’s point-after up and good, the Tigers drew to within two, 21-19.

The Calera offense was not to be outdone and drove 61 yards for a touchdown to be capped off by a Tyes 9-yard touchdown. With 3:52 left in the game, Calera led 29-22.

Facing a third-and-six from the Eagles’ 20-yard line, Bishop found Parker in the end zone to draw the Tigers to within one with 1:18 to play.

CCHS coach Donnie Hand and staff elected to leave the offense on the field to go for two and the win.

Parker took the snap from center and pitched out to Keishun White, who passed to a waiting Davre Williams in the Eagles’ end zone; however, the call from the referee was an incomplete pass.

The Eagles safely hauled in the ensuing onside kick, sealing the win for Calera.