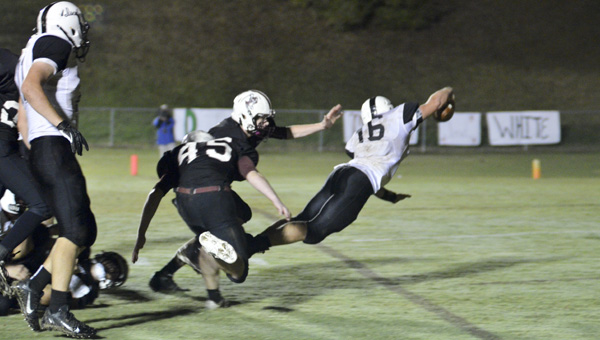 Isabella junior Tyler Smith lunges to score a touchdown Friday night against the Thorsby Rebels.
The Mustangs ended their regular season with a 43.6 win over Thorsby.

Isabella ended their regular season with a 43-6 win over Thorsby Friday night.

The Mustangs started the game out strong with junior Tyler Smith scoring the first two touchdowns within 42 seconds of the first quarter.

Senior Darius Davis scored the only touchdown for the Rebels in the second quarter.

“We came out strong,” Mustangs coach Scott Booth said. “We got out to a great start at the beginning and then we lost our emotion and we weren’t playing very hard. I normally sit in the press box but thought it might be best if I come down to the field, and it seemed to work because we played much better in the second half.” 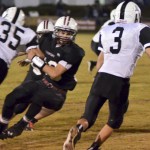 The Thorsby Rebels were unable to pull a victory over the Mustangs Friday.

Although the Rebels were unable to pull a victory over the Mustangs Friday, coach Billy Jackson commended his players for playing hard throughout the season.

“I am proud of them because they have all played hard this year,” Jackson said. “We have had a lot of injuries to some of our key players, and sometimes you only have so many bullets in the gun.”

The Mustangs finished out the season with a 7-3 record and the Rebels were 1-9.

The Chilton Crimson Tide club will host a pep rally for Alabama fans Nov. 7 at 6 p.m. at Clanton... read more