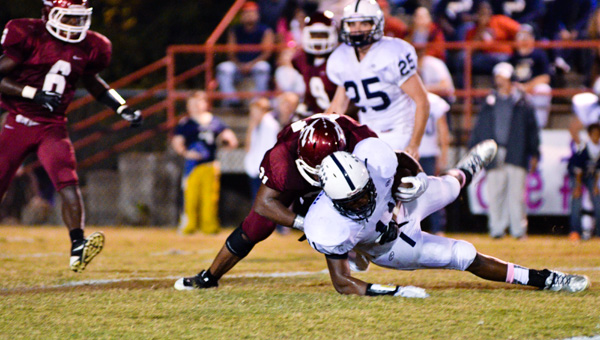 Maplesville concluded its third unbeaten regular season in the past four years with Thursday’s 49-7 victory over county rival Jemison.

The Red Devils (10-0 overall, 7-0 region) are used to beating up on Class 1A competition, but on Thursday stepped up to take on a Class 4A foe.

The result was much the same.

On the first possession of the game, MHS quarterback Colby Chambers connected with Damian Mitchell for a touchdown pass on a fourth down play.

The point-after try was missed, but the Devils led 6-0 just 2 minutes into the game.

On Jemison’s ensuing possession, Anthony Moore intercepted a pass and returned it for a touchdown.

Chambers passed to Mitchell for the 2-point conversion and a 14-0 lead.

The Panthers (7-3, 5-2) looked to make a game of it when they scored on their next possession, on a seven-yard scoring strike from Kevin Nunn to John Underwood, but Mitchell returned the ensuing kickoff 85 yards for a touchdown.

The rout was on.

MHS made it 28-7 on a nine-yard run by Mitchell. Then, with about 1 minute left to play in the second quarter, the Devils defense stood up Nunn in the Jemison backfield, allowing Brett Walker to rip the ball away and run it about 65 yards for a touchdown.

With a steady rain falling during the second half of the game, Chambers scored on a 2-yard quarterback sneak in the third quarter, and Cole Spencer passed to Loftin Smith for a 25-yard touchdown in the fourth quarter.

Both teams had locked up playoff berths prior to Thursday’s game.

Maplesville will host a first-round playoff game next week, while Jemison will be on the road.

Even though one week of the regular season remains, the playoff fates for local high school football teams have been... read more