FOOTBALL PLAYER OF THE WEEK: McKinney carries the load for Tigers 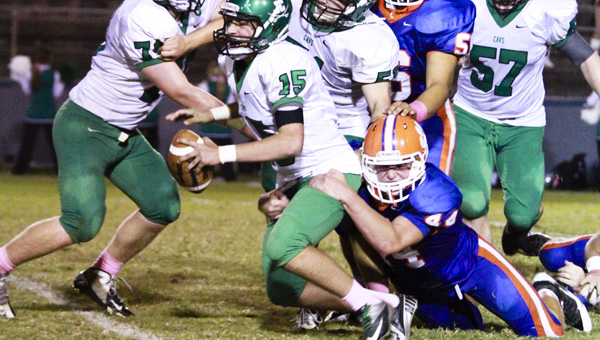 Seniors Patrick McKinney and Beau Waid form quite a tandem at each end of Chilton County High School’s defense line.

The pair pressure the opposing quarterback and stuff the run game.

“When Beau decided to play, Patrick would get with him and try to show him some stuff. Coaches can get things across, but when you have a player that’s been there for a long time, sometimes that’s easier.”

Waid is playing football this year for the first time since youth league, while McKinney is in a starting role for the third consecutive season.

“He probably knows the defense as well as the coaches,” Hand said.

While his first two years as a starter were spent at defensive tackle, McKinney was moved to end this season so that he could take less of a beating and thus contribute more on offense as a tight end.

But with Waid out of last week’s game against Ramsay while recovering from an infection, McKinney carried the load himself.

McKinney registered 11 tackles, five tackles for loss, one sack and two quarterback hurries, and has been named The Clanton Advertiser’s Football Player of the Week.

Hand said that other than a busted coverage on a fourth-and-1 play and a screen pass that included a few missed tackles, the Tigers defense performed well in the 20-13 win.

Waid should be back in action for Calera’s visit this week.

•Returned two kickoffs to total about 120 yards in the game.

•Recorded 8.5 tackles, including one tackle for loss, on defense.

•Completed four passes in 12 attempts for a touchdown, which was the game-winner on fourth down from the 13-yard line.

•Rushed eight times for 65 yards and a touchdown in a 69-6 win over Keith.

•Returned an interception 40 yards for a touchdown.

•Returned a kickoff 100 yards for a touchdown.

•Rushed six times for 106 yards and two touchdowns in a 66-6 win over Holy Spirit.

After losing 12 consecutive games, any kind of win is exciting. But Verbena could not have asked for a more... read more