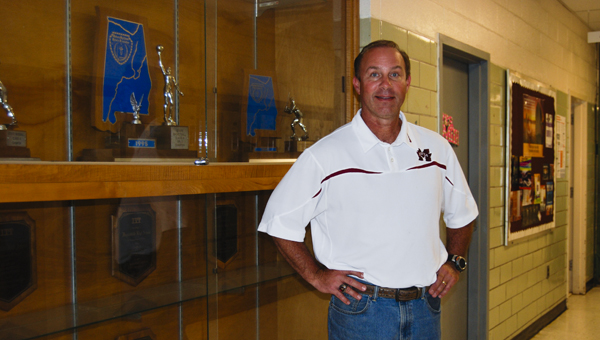 Steven Hunter was hired as Maplesville High School’s principal in July. He has also served as assistant principal at MHS.

Since being hired as principal at Maplesville High School in July, Steven Hunter has spent time reacquainting himself with a school and town he got to know several years ago.

Hunter served as assistant principal at MHS for a year before transferring to Leeds Middle School for three years and then working as director of Leeds Alternative Program.

Hunter said being offered the MHS principal job this summer was exciting for him and his family.

“We love Maplesville,” Hunter said. “A chance to come back to a home is what it felt like.”

Hunter said he didn’t know about the position opening until MHS football coach Brent Hubbert called him about it after former principal Maggie Hicks resigned.

“When I heard about it, I was definitely interested,” Hunter said.

His son Thaddeus is in the ninth grade at MHS and will commute with Hunter from Leeds for now.

Hunter and his wife, Christy, have two more sons. Tyler, their middle son, is a senior at Leeds High School. Their oldest son, Tanner, is a sophomore in college.

Hunter said this is his first year as a principal.

Hunter grew up in Springville and earned his bachelor’s degree from Samford University, where he also played collegiate baseball.

He said his coaches inspired him to become a coach. He opted to coach at the high school level because he wanted to have enough time to start a family.

“I just enjoyed seeing what the coaches did for us, and I wanted to be a coach,” Hunter said. “I knew that I wanted to get married and have a family. I knew it would be tougher and more time-consuming to have a family and be a college coach.”

He started his career at St. Clair County High School and served as head baseball coach and an assistant football coach.

Hunter left St. Clair in 1993 after its football team won the state championship.

“After about 12 years of coaching, I went ahead and got my master’s degree in administration because I felt like I would want to finish out as a principal,” Hunter said.

By adjusting the school’s schedule, Hunter said the math coach would be able to sit in more classes and find more students needing extra help with math.

Hunter said he would like to keep core subjects like English and math early in the school day so that students—athletes, for instance—won’t miss those classes when afternoon activities arise, and they will be more focused in the morning.

“We want to put our student athletes in the best possible position to be successful,” Hunter said. “Normally, mentally, they are the most fresh in the mornings, so we want to keep our tougher academic subjects in the early part of the day.”

Hunter said he also would like to see the school’s small band grow despite the lull it has experienced lately.

“We’re working to hold onto our band unit right now,” Hunter said, “And make sure we keep what we have and try to nurture that.”

The school’s new multi-purpose facility is expected to be finished in the next couple of months and will provide an indoor space for band students, P.E. classes and athletes to use for weight training.

“I think that’s really going to help us,” he said.

Otherwise, Hunter said he plans to mostly observe how the school functions and only make changes when they are necessary.

“It’s going to be a learning year,” Hunter said. “I was so excited for the opportunity to come back because a lot of times, you don’t get a second chance to come back to the place you love. We’re definitely blessed to be back.”

As soon as the interior of Maplesville High School’s new facility is completed and inspected by the state, students and... read more