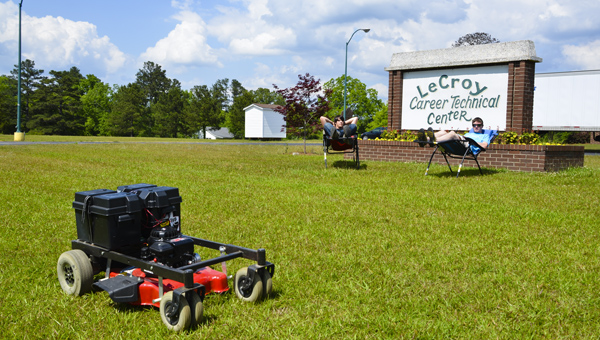 Robotics students Trevor Moon, left, and Chase Minor sit back as Minor guides the automated lawnmower they helped design and construct across the grass at the career tech center.

Students in the robotics program at LeCroy Career Technical Center aren’t always working together on the same project, but their instructors make sure they are always working on something and moving forward in their education.

An automated lawnmower, also known as “The Ardumower,” is a project one group of students completed before school dismissed for the summer last week.

While one group worked on robots to take to the national robotics competition in June, another group designed and constructed an automated lawnmower using parts from a motorized wheelchair, a push mower, an Arduino mini-computer and sensors.

In February, robotics instructors Jay LeCroy and Jason Sosa challenged the students to construct a “real-world” device that could help the community, and they suggested a lawnmower with hands-free operating capabilities as an option.

The students adopted the lawnmower idea and began the project by disassembling a motorized wheelchair and sending it to the welding department to stretch the metal frame.

Using other parts from the push mower, along with the Arduino and sensors to detect stationery objects on the ground, students constructed a mower that can be programmed to cut grass with a handheld remote control or autonomously (without a remote).

Robotics students Trevor Moon of Thorsby and Chase Minor of Clanton operated the mower with remote controls Tuesday afternoon, but Sosa said they could also use computer software in the STEM (Science, Technology, Engineering and Mathematics) program with Google Maps to plot coordinates of spaces of grass they want the mower to cut.

Students are also working out the kinks in the mower, such as its inability to resume cutting grass after encountering a stationery object the mower can’t maneuver around when it isn’t being steered by a remote.

“As time goes on, (students will) add more parts and give it more intelligence,” Sosa said.

Although students have not entered the mower in any competitions, Sosa said they have taken it to a robotics event at The University of Alabama and plan to take it to upcoming events to show other robotics students, teachers and community members their progress.

“This is the fourth thing now that will work on its own,” LeCroy said of machines students have built since the robotics program relocated to the center nearly a year ago. “(It’s) all controlled and built by students.”