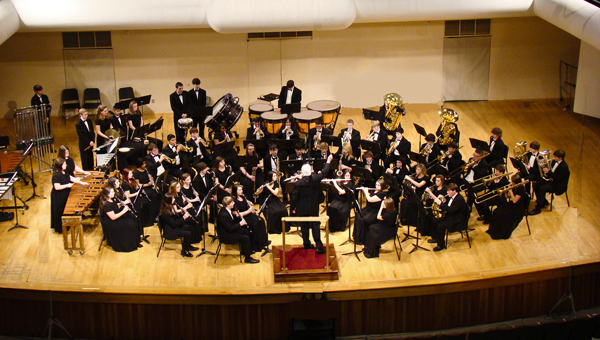 For the second time in three years, the Jemison High School Blue Regiment Symphonic Band earned a “Superior with Distinction” rating in the Alabama Bandmaster’s Association Music Performance Assessment at the University of Alabama in February.

The Jemison High School Blue Regiment Band will celebrate its golden anniversary with a concert April 29 at the Jemison Municipal Complex Auditorium at 7 p.m.

The symphonic band and the beginning band will perform, and members of the starting band in 1963 are invited to attend to be recognized.

The band’s 50-year tenure began with a group of parents petitioning the JHS administration, Chilton County Board of Education and superintendent to fund a band program at the school, according to former band member Mack Gothard, JHS Class of 1969.

At that time, the only band program in the county was at Chilton County High School, Gothard said.

“After a rough beginning with lots of negative opposition, the BOE approved funding for a band teacher,” Gothard said. “The first band director was Anthony Bel Castro.”

He said one of the first places the band practiced was in the old agriculture building between the old gym and elementary school, and members had to clear hay out of the building before they could use it.

“Our first concert was in the old gym,” Gothard said. “The acoustics were terrible. In 1965, we moved into the new high school and started practicing on the stage of the auditorium.”

After four years, the band performed at half time for the 1967 state football championship for Region 2-A and then in other areas of Alabama, as well as Florida, Texas, Georgia, Louisiana and Washington, D.C.

“Members of the band have gone on to march in college bands throughout the state and country,” Gothard said. “Members have become leaders throughout our county, state, nation and world. Generations of band members continue the traditions from brothers and sisters, nieces and nephews, sons and daughters and even to grandchildren.”

Current members of the Jemison High School Blue Regiment Symphonic Band participated in the Alabama Bandmaster’s Association Music Performance Assessment at the University of Alabama in February and received a “Superior with Distinction” rating, the highest rating a band can achieve.

This marks the second time in three years the band has received “With Distinction” honors.

Martin has served as the JHS band director since 2005.

He said the band will also perform at Chilton County’s Special Olympics on May 2 before leaving for Atlanta to attend and perform at the Southern Star Music Festival on May 3.

Students will be performing on a national level with other schools around the southeast.

The symphonic band will be adjudicated by renowned judges from the Southeast, and an awards ceremony will be held at Six Flags Over Georgia on May 4.

The JHS Blue Regiment Band will cap off the school year with its annual banquet on May 13.

Kindergarten registration at Chilton County Schools started Monday and will continue through Friday for the 2013–2014 school year. •At Jemison... read more