Ready to run: Locals will compete in marathon

The marathon is one of the true tests of human endurance.

The effort that goes into making the human body go 26.2 miles in one attempt is a testament to how far the mind can focus, how long the muscles in a runner’s legs can withstand constant stress and arguably most importantly, how strong their spirit is.

Sunday will mark the 12th running of the Mercedes Marathon in Birmingham, and several Chilton County runners will be making an attempt to finish all 26 miles.

They all come from different walks of life, with each having a different motivation for participating.

Regardless of their differences, each has one thing in mind: finish what you started.

Age is but a number

On any given morning, Dr. Cecil Pavey can be seen running around Clanton, logging in miles before heading to work at Chilton County Optical. 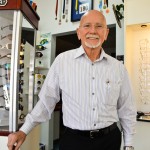 Heavy medals: Eye doctor Cecil Pavey is one of several locals who will compete in the Mercedes Marathon this weekend. Medals from previous races hang in Pavey’s business.

He said his affinity for running, which is going on five years, wasn’t originally his idea.

“It started out with my wife,” he said. “She told me I’d have to get up and do something.”

“I started out on a treadmill,” he said. “I’d run five minutes, then 10. I gradually worked my way up till I ran my first marathon.”

If you think that’s impressive, consider the fact he qualified for the Boston Marathon just two years ago. While some might think his age might be a disadvantage, Pavey said he feels otherwise.

“I consider my age an advantage,” he said. “I’m in perfect shape, and I trust the Lord with my health. I try to take care of myself, but the main thing is I trust God with my health.”

Running for a cause

Erron Price will be taking the starting grid for the fourth time at the Mercedes, and while some will join him there for the reason of pride, Price will be running for a different reason.

He’ll be running to raise money for the Speed the Light organization, which provides transportation for overseas missions.

Like Pavey, Price said he had help from a family member getting started.

“My brother Erric has been a big inspiration,” he said. “He’s done a bunch of Ironman events.”

Ultimately though, Erron Price said he wanted to help others through his running. 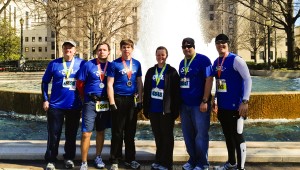 Chilton County's Nicholas Looney blocks out Shelby County's Brandon McKinney in the Tigers' 80-38 loss to the Wildcats at the... read more