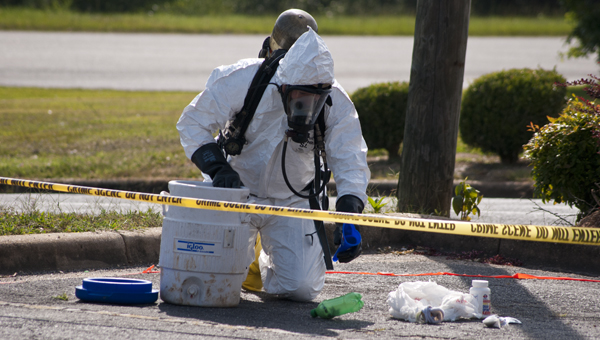 It’s the second time in less than a week that officers have busted a lab in one of the hotel’s rooms.

CPD Cpl. David Kline said two people, a man and a woman, would be arrested and charged in connection with the lab found Wednesday. Check back for updates on the arrests.

Officers responded to the hotel after receiving an anonymous tip around 4 in the afternoon, said Police Chief Brian Stilwell.

“When officers arrived here, you could smell it and feel it (burning in your throat),” said Stilwell. “How these people stay in there, I have no idea.”

Stilwell said the labs are dangerous not just for the drugs they are used to manufacture.

“The concern is not only for the hazardous materials — they are essentially playing with bombs,” Stilwell said.

The “shake and bake” lab found Wednesday was similar to the one recovered last Thursday in another room. Two arrests were made in that case.

The labs use ingredients like ammonia nitrate, drain cleaner, lithium batteries and lighter fluid to cook the meth.

“There’s a lot of bad stuff,” said Capt. David Clackley. “If it gets enough air, you get what you need to start (a fire).”

Clackley removed the lab from the room, which will be recovered by a special team out of Bibb County for disposal.

Days Inn Manager Jenee Miller said hotel staff is cooperating with police and will not tolerate drugs on hotel grounds.

“We are 100 percent working with them to try to get this stuff out of the hotel,” Miller said. “We’ll take whatever actions we have to take to get ride of this type of crowd.”

The room where the meth was found Wednesday was booked at 3 p.m. at the standard rate and reported to police less than an hour later, Miller said.

She said Days Inn has done work recently to make the hotel better, including upgrading rooms and redoing the parking lot.

“We are doing everything to make it a better place,” Miller said.”We want the family people to know they can come up (and) not have to worry. We want the people that do this stuff to know we are not going to tolerate it.”

Miller said the hotel is a victim too, having to pay costly clean-up expenses.

“They are hurting us,” she said.