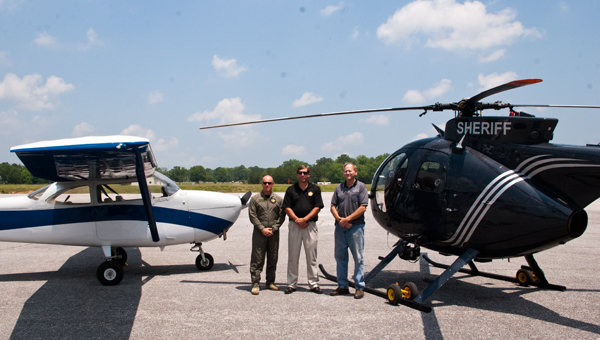 Chilton County Sheriff Kevin Davis (center) acquired a plane and helicopter for the department to use. Ken Gilliland (right) was named a reserve deputy, and will pilot and maintain the aircraft. He will also provide training to sheriff's deputies, such as Dave Williams.

The long arm of the law in Chilton County just got a lot longer.

Thanks to a government program, the county Sheriff’s Department acquired a helicopter and a plane at no cost to taxpayers, Sheriff Kevin Davis said.

The aircraft could be used for disaster relief, pursuing fugitives or even “long-line rescue,” which entails dropping a ladder from the helicopter with rescue personnel down to someone in distress.

Davis was able to acquire the aircraft through the 10-33 Program, which lends military surplus items to law enforcement agencies.

The helicopter and plane were in the possession of the Dale County Sheriff’s Department, Davis said. 10-33 Program administrators wanted the machines to move to a Central Alabama agency because no department from Birmingham to Montgomery has air capability.

So, Davis was invited to take a look at the aircraft. He took along with him Ken Gilliland of B&G Flying Service Inc., which operates out of the Chilton County Airport.

Gilliland has agreed to pilot and maintain the aircraft, and was named a reserve deputy.

“Both of them are really nice airplanes,” Gilliland said.

Gilliland will also train sheriff’s department personnel to pilot the aircraft. Gilliland will start with Dave Williams, a narcotics investigator who has already received several hours’ worth of training.

Davis said grants through the U.S. Department of Homeland Security are available for fuel, maintenance and training.

The aircraft were flown to Chilton County on Wednesday and will be housed in a hangar at Gragg-Wade Field.

Davis said official policies and procedures about use of the aircraft would be drafted soon.