Student honored for bravery during storm 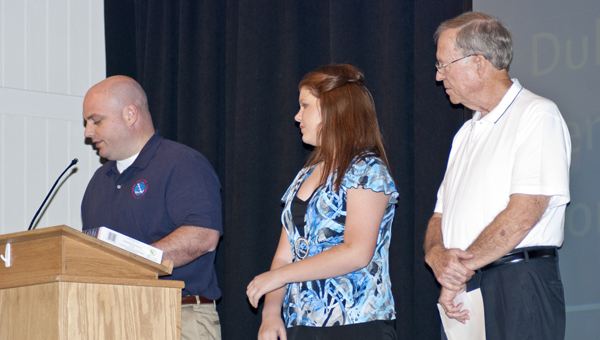 Kevin Laws, a meteorologist with the National Weather Service in Birmingham, presents Isabella seventh grader Olivia Owens an award for her bravery during January's tornado. She was also given a $100 check by Dan Nolen, president of the Clanton Kiwanis Club.

An Isabella seventh grader was honored Friday for helping get her family to safety during January’s tornadoes.

As a damaging EF-2 tornado headed toward her home during the early morning hours of Jan. 23, Owens sprang into action by alerting her parents, James and Charlotte, and her two younger sisters, Gracie and Emma, of the pending danger, Laws said.

“Olivia remembered her severe weather safety rules from Ms. Pierce’s sixth-grade enrichment class, where the students were taught to take shelter in an interior portion of the house,” Laws said during the program. “Thanks to Olivia’s prompt and decisive action, the family safely rode out the storm in an interior hallway as the tornado did significant damage to their home. Olivia’s bravery is recognized for remembering to do the right things in the face of danger and for being a good citizen of Chilton County.”