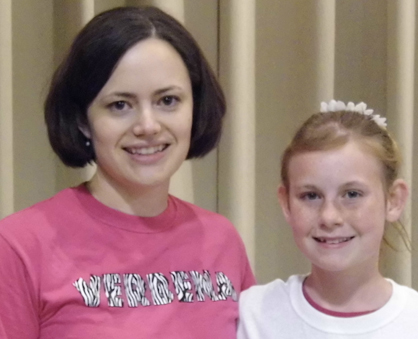 Verbena elementary counselor and librarian Christina Cochran with student Grace Cessna, who raised the most money in the school’s drive for St. Jude’s.

“We are so proud of our students for embracing Math-A-Thon and raising critical funds for St. Jude,” said coordinator Christina Cochran, school counselor and librarian. “Every dollar raised will help support the St. Jude mission of finding cures and saving children in communities worldwide.”

Verbena collected more in 2012 than any other previous year. Cochran promised students if they raised $2,000, she would kiss a pig. Though they didn’t quite hit that mark, she kissed the pig nevertheless, along with recognizing the students’ achievement.

Among those honored was Grace Cessna, who earned the most pledges at $260. The class with the most participation and most overall money raised was Mrs. Deavers’ third-grade class, which earned them a popcorn party. 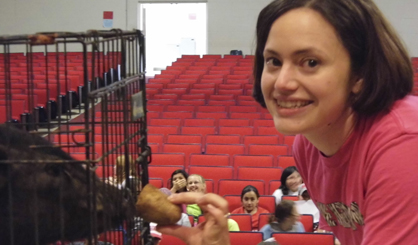 Cochran promised students she would kiss a pig if they raised $2,000 for St. Jude’s.

Since it began more than 30 years ago, Math-A-Thon has become one of America’s largest education-based fundraisers.

More than 10,000 schools across the country participate in the program every year.

Math-A-Thon is also one of the most successful fundraising campaigns for St. Jude, having raised nearly $400 million since its inception.