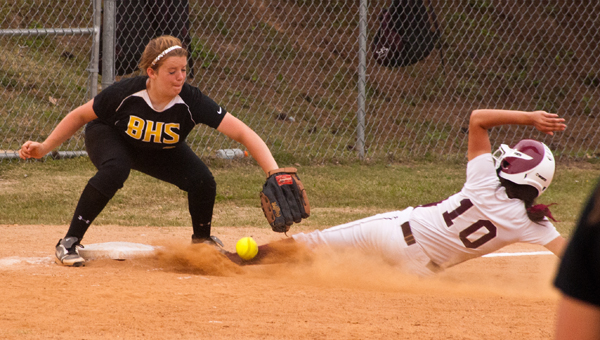 Sliding safely: Thorsby’s Lilly Barnett (10) slides into third base before Billingsley’s Baylee Tindol can apply a tag on Wednesday during the two teams’ softball area tournament. Both the Rebels and Bears advanced to the regional round of the playoffs.

Thorsby needed to win a tiebreaker last week to earn the right to host this week’s softball area tournament.

On Wednesday, the Rebels looked every bit the area champions as they won two straight tournament games to claim the title.

With Thorsby receiving a first-round bye in the double-elimination tournament, Isabella defeated Billingsley, 7-5, in the first game of the day. 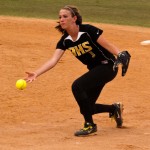 Billingsley second baseman Anna Asbury pitches to first base for an out. Asbury went 1-for-2 with a run batted in during the game.

Thorsby then defeated Isabella, 3-2, and IHS was eliminated with a 10-7 loss to Billingsley in eight innings.

The result ended Isabella’s season and guaranteed Billingsley and Thorsby berths in the regional round of the Class 2A playoffs. The top two teams in each area tournament advance.

In what amounted to an area championship game, Thorsby won 17-3 in six innings.

Savannah Bice led off the game with a double and scored on a wild pitch. THS would never relinquish the lead.

The Rebels scored in every inning: four runs in the second inning, two runs in the third inning, two in the fourth, one in the fifth and seven in the sixth. Every player in the starting lineup scored at least one run.

Haley Barnett paced the Rebels by going 4-for-4 at the plate with a double, three runs scored and four runs batted in.

Lilly Barnett went 3-for-4 with a double, a triple, two runs scored and three RBI.

Taylor McManus was the winning pitcher. She allowed three runs on five hits and one walk in six innings pitched while striking out two batters.

The regional tournament will be played at Troy University on May 11-12.

Billingsley gets back in win column on homecoming