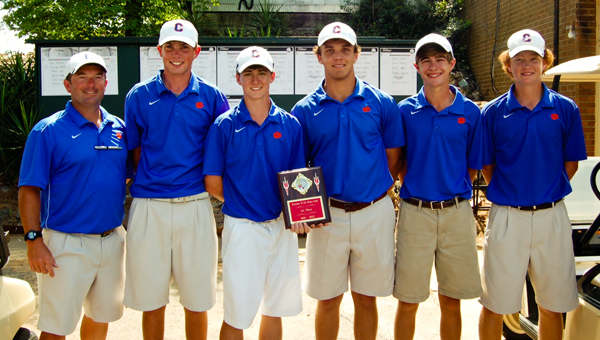 Section champs: Chilton County’s golf team won its sectional tournament at Sylacauga Country Club on Monday. The Tigers next will play in the sub-state round of the playoffs.

Jacob Hay drained a putt in a sudden death playoff to give Chilton County High School’s golf team its second Class 5A, Section 2 championship in as many years.

CCHS and Briarwood Christian were tied with a team score of 303 at the end of regulation, best among the 10 teams that competed at Sylacauga Country Club, setting up the playoff.

Ivan Truss shot a 2-under par 70 to lead the Tigers. His score was also the second best at the tournament.

Forrest Knight and Blaken Jenkins both recorded a 75, Jordan Lightsey shot an 83 and Hay had an 86.

Demopolis finished third, and Chelsea was fourth. The top four teams advance to the sub-state round, which will be played at Arrowhead Country Club in Montgomery on May 7.

The top six teams at sub-state advance to the 5A state championship.