Ministry lets kids help each other 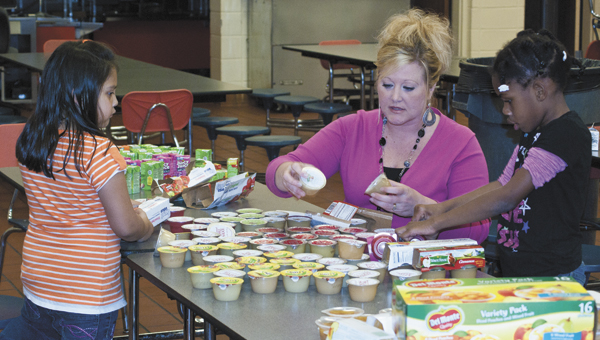 Hunger – it’s a basic feeling all humans are equipped with at birth.

It is a part of daily life, and it normally goes away when a person eats enough.

Only when a person eats enough.

In Chilton County, some children dread leaving school on Friday afternoons because they know they will not have enough food at home over the weekend.

Anderson started the Snack Sack ministry last year after realizing how many children at CES alone were suffering from hunger, especially on Saturdays and Sundays when school meals are not available.

“That’s where I work. I know the children. I see the need,” Anderson said. “It just broke my heart to see children coming to school hungry.”

Anderson enlisted help from her Sunday School class to start the Snack Sack ministry, which provides bags of nutritious, non-perishable food for children to take home every Friday.

The ministry also provides teachers with snacks to keep in their classrooms for the same children who do not usually have one during snack time.

“We didn’t want to start something and just not be able to continue it.” Anderson said. “We couldn’t do everybody, so we started where we were.”

The ministry serves from 25-28 students at CES, kindergarten through second grade.

This year, students involved in the CES after-school program called Tiger Trails are helping to pack the sacks every Thursday for community service.

“They really enjoy helping other children their own age,” said Anderson, who is co-director of the program. “It’s done something to their hearts.”

Associated Foods in Clanton has consistently donated white bags for the snacks, and numerous FUMC members have contributed to the ministry.

Volunteers work with teachers and the guidance counselor at CES to determine which children need help.

Those children are sent home with a letter about the ministry, and their parents must sign the letter if they approve of their children being recipients.

Adult and student volunteers discreetly deliver the bags to the designated classrooms every Friday afternoon.

“The part that’s been most satisfying for me is watching children develop hearts to help others,” Anderson said. “We double bag them into two white plastic bags and tie them up with a card that says Snack Sack Ministry of FUMC,” Anderson said.

Each bag is designed to last an entire weekend.

“It’s not a project. It’s a ministry,” she said. “We’ve really looked at it as people helping people.”

Anyone can donate food, money or time to the ministry, Anderson said. At least 25 children will be better off for it.

“They are so appreciative,” Anderson said. “You’ve never heard a complaint about the types of foods in the bags.”