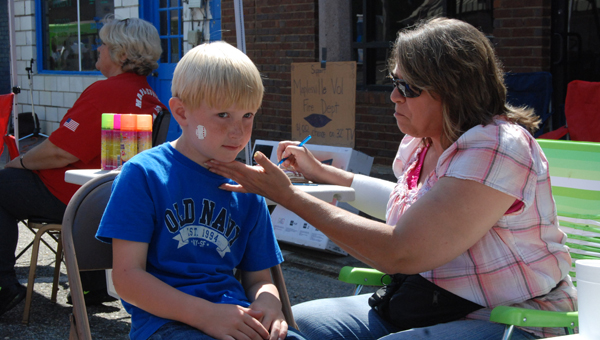 The town’s annual event received a positive turnout this year, especially for food vendors and a casting call for the feature film “The Story of Bonnie and Clyde.”

“All the food vendors did wonderful,” Town Clerk Sheila Haigler said. “Just about every one of them sold out of everything they brought. They were very excited about how they did in the food court.”

An antique car show added to the event’s other attractions, with about 40 cars on display.

“That was much bigger this year,” Haigler said of the car show. “Alton Cole headed up the car show for us, and he did an excellent job.”

“They were very well pleased with the turnout,” Haigler said of Holly and her team, who expect to film scenes in Maplesville at the end of May or the beginning of June this year.

Maplesville resident Clem Clapp said Wayne Arnold’s customary “War Between the States” display and dialogue in the train depot were another hit with visitors.

“There were folks in there all day,” Clapp said. “He (Arnold) probably had twice the number of artifacts this year that he had last time. That’s what makes it attractive to anybody that likes history.”

Another popular exhibit was a quilt show organized by Virginia Green and Mildred Corey in the town library.

Haigler said they displayed about 52 quilts with biographical sketches for each quilt.

“It was a tremendous hit,” Clapp said. “They were well-versed in discussing the different patterns that were there.”

An outdoor reunion and picture display for the Chambers family received numerous visitors too.

Clapp said Maplesville will continue to schedule Heritage Day for the second Saturday in April, assuming no major conflicts arise.

“Next year, our focus is to have more activities for the children,” Haigler said. “Maybe more of our homes will be open for tours.”