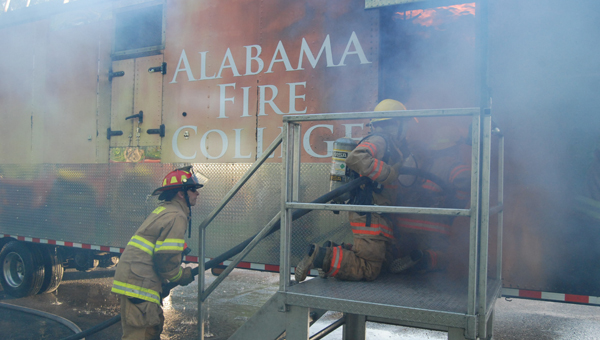 Billowing smoke enveloped firefighters as they ran headfirst into a burning trailer, fire hoses in hand, to extinguish flames lapping at them from different spots in the narrow passage April 12.

They attacked the blaze in teams of four or five, alternating every few minutes, unsure of what they would encounter each time they entered the trailer.

Fortunately, the fire was only part of a training session at Jemison Fire Department and was confined to a mobile simulator trailer from Alabama Fire College.

“They take it all over the state for live fire training,” said Jemison Fire Chief John Dennis of the metal, computer-operated trailer. “This is a preferred method where it’s all controlled. It gives you a good, realistic feel of the fire.”

It was the first time the AFC trailer has come to Chilton County.

The trailer’s interior resembles a house, with metal panels that instructors can move in order to reconfigure the rooms and create new situations for fires.

Swanson said simulator training also allows participants nearly endless opportunities to get comfortable with their equipment and working in teams.

“We can recreate situations over and over in the simulator,” Swanson said. “We can get them to actually trust their personal protective equipment. They feel better putting it on.”

Instructors use computers to control the locations of the fires inside the trailer and sometimes place mannequins in the rooms to simulate people trapped and needing to be carried out of the burning structure. 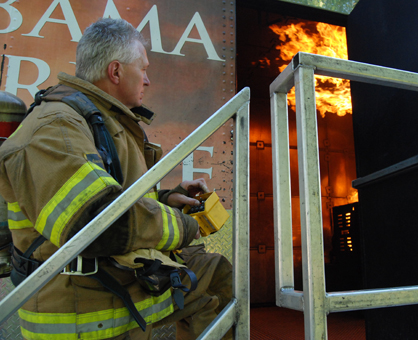 Jemison Fire Chief John Dennis uses a handheld device linked to the trailer's computer system to start a fire in the "stove."

Three instructors go into the trailer with each group of participants.

Temperature gauges and two emergency stop buttons on the walls can shut off fires and restore the trailer to its normal temperature in seconds.

The only cost fire departments incur with hosting the AFC trailer is for propane.

Dennis said Coast Gas in Jemison donated propane for the training, which was free for firefighters.