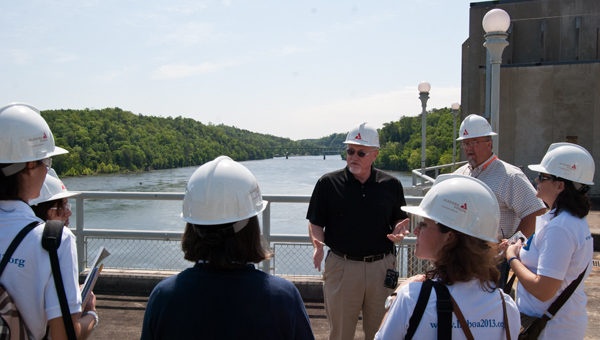 Mitchell Dam Superintendent Roger Yeargan, who is also President of the Rotary Club of Chilton County, talks about the dam to a group of young professionals from Portugal on Wednesday.

Construction of the Alqueva Dam in Portugal recently created the largest reservoir in Western Europe.

On Wednesday, a group of young Portuguese professionals took a tour of Alabama’s second oldest dam.

The Rotary International Group Study Exchange Team said it was interesting to learn more about a concept that has been a much discussed topic in their country since the 1950s.

“I think it was amazing,” Ana Margarida Gomes said.

The GSE team was hosted by the Rotary Club of Chilton County. Club President Roger Yeargan has served as superintendent of Mitchell Dam for many years. 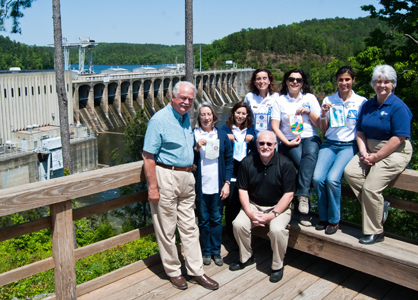 Rotary District 6880, which includes clubs in the state from Chilton County south to the Gulf of Mexico, is hosting the GSE team for several weeks. A group of Americans later this year will visit Rotary District 1960, which is basically the southern half of Portugal.

“What we are liking about Alabama is that everyone is so nice and so welcoming to us,” Team Leader Paula Cortes said. “That has really touched us.”

Mitchell Dam was erected in 1923, making it the second oldest Alabama Power dam in the state, after only Lay Dam which was put into use in 1914.

After a tour of the dam that lasted longer than an hour, the GSE team was treated to lunch in a separate building at the dam. The visitors gave a presentation on their country, and then each team member shared a brief biography.

The catered meal was provided by the Central Alabama Electric Cooperative. Heaton Pecan Farm donated boxes of candy for each team member.