Jemison out of playoff contention

The Panthers fell to DCHS, 5-4, on March 30. They needed a win at Plantersville on Tuesday to force a tiebreaker but lost, 4-3. 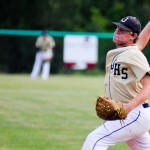 Bibb County has clinched the area title, and Dallas County is the runner-up. The top two teams in each area advance to the state playoffs.

A line drive to right-center field by Blanton Strickland with the bases loaded drove in the game-winning run in extra innings.

The Hornets held a 3-2 lead in the top of the seventh inning, but Jemison tied the game when Trahe Smith tripled and drove in Jacob Hatch.

The Hornets pushed closer to victory in the bottom of the eighth, when Kevin Simmons led off with a single, and then went on to steal second base.

The Panthers allowed another hit, and then opted to walk Ethan Fancher and load the bases.

Strickland came up to the plate and delivered the hit that drove in Simmons for the victory.

The Hornets had trailed early in the game when Jemison took a 1-0 lead in the top of the second inning, but Dallas County responded when Simmons doubled and drove in D.J. Stiles to tie the game at 1-1 in the bottom of the third inning, creating some momentum in the process.

Dallas County took a 2-1 lead in the bottom of the fourth inning when Fancher stole home.

Jemison countered when Austin Chapman hit an infield single that allowed a runner to score from second base and made it a 2-2 game in the top of the fifth inning.

But the Hornets answered in the bottom of the fifth when Justin Moreland got an infield single that allowed Simmons to score from second and gave the Hornets a 3-2 lead.