Sure, this year’s recipient is sure to have an interesting story, and Tigers fans will want to hear from assistant coach Jay Boulware.

But for the first time, the banquet will host two Auburn icons: Aubie the mascot and one of the school’s live eagles. 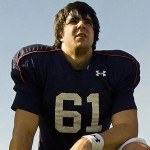 The event, which is in its 46th year, has become a staple for local fans.

“If you’re an Auburn fan, we want you to be there,” club member Amber Darnell said.

Harris, a long snapper, became a member of the program without holding a scholarship. Harris’ successful snap set up the game-winning field goal against Oregon in the 2011 BCS Championship Game, and his contributions led to the coaching staff deciding to give him a scholarship before this past season, his senior year.

Harris also made the 2009 Southeastern Conference Academic Honor Roll. He is from Carrollton, Ga.

Along with the eagle will be a presentation of how Auburn fans came to use the “War Eagle” cheer.

Also new this year will be a silent auction of AU football memorabilia. Darnell said an item signed by the program’s three Heisman trophy winners–Pat Sullivan, Bo Jackson and Cam Newton–would be among those available in the auction.

The banquet will include a steak dinner. The cost for non-members is $35, while members can attend for $25.

The deadline to register is Thursday.