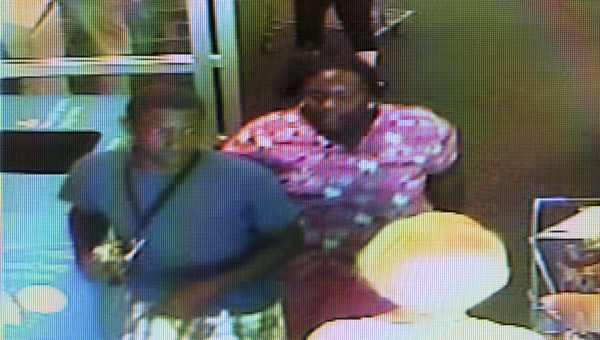 Two suspects, a man and woman, allegedly stole money from a Walmart cash register Monday afternoon. Anyone with information about the suspects is asked to call Cpl. Whitney Ray with the Clanton Police Department at (205) 755-1194, ext. 318.

A man and woman worked together Monday afternoon to allegedly steal a cash drawer from the Clanton Walmart.

CPD officers responded to the store around 3 p.m. after Walmart’s loss prevention reported the two suspects taking a cash register from the sporting goods department.

The two were able to get the register open and remove the money before running out of the store, Cpl. Whitney Ray said.

The suspects fled in a gold Ford Taurus with a Montgomery County tag.

Using video surveillance from the store, authorities were able to identify the female suspect as Ashley Nichole Johnson of Montgomery.

Johnson was pulled over in Autauga County for speeding shortly after the Walmart theft, but before CPD could issue a be on the lookout for alert.

However, she was arrested on an unrelated outstanding theft warrant in Alexander City, Stilwell said.

Johnson will face felony theft of property charges in connection with the Clanton case. Detectives continue to look for the male suspect.

The two have allegedly committed similar thefts in other places, Stilwell said.

“During the course of the investigation, it has been discovered that apparently this couple has done this in several other jurisdictions,” Stilwell said. “CPD detectives are now providing information to the other agencies to aid in their investigations.”