CCA to put on the Scottish play 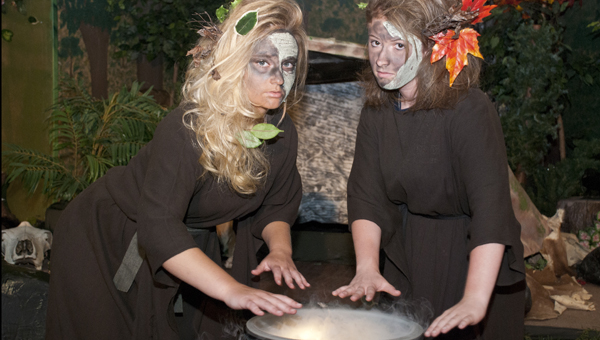 DOUBLE TROUBLE: Stephanie Hagler (left) and Brittney Jones play witches in Shakespeare's Macbeth, which will be put on next week at Chilton Christian Academy. Kristen Vines was over make-up for the production.

One of Shakespeare’s best-known tragedies will be put on next week at Chilton Christian Academy.

“Macbeth” will be performed Thursday, April 12 and Friday, April 13. Every student at the private school will have some part in the production — from the actors on the stage to those responsible for lights, costumes, scenery, props and more.

This will be the second year CCA has put on a Shakespeare play. Last April, the school did “A Midsummer Night’s Dream.”

English teacher Charlotte Johnson, who is directing the play, said she thought it would be good to change things up this year.

“I thought it was good to do a tragedy, since we did a comedy last year,” Johnson said.

The play recounts the rise of power hungry Macbeth to King of Scotland, whose blind ambition and greed ultimately lead to his downfall. 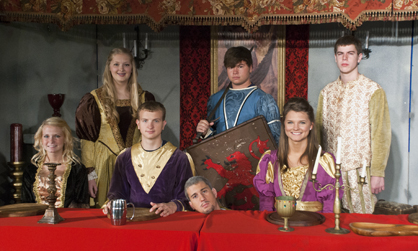 Several of the cast and crewmembers also play sports for the school. They say theater practice is just as hard as those on the football field or basketball court.

“It’s hard too, but not as physically, but more mentally,” said senior Hamby, who quarterbacked this year’s football team to a 6-man state championship.

Students say the long rehearsals and the fact that everyone at CCA has some part in the production have helped bring everyone closer.

“Being such a small school … we have grown more as a family,” said Harris.

Doors open Thurday and Friday at 6:30 before a 7 p.m. curtain time. Tickets are $5 and can be purchased at the door or at Victory Baptist Church prior to then.